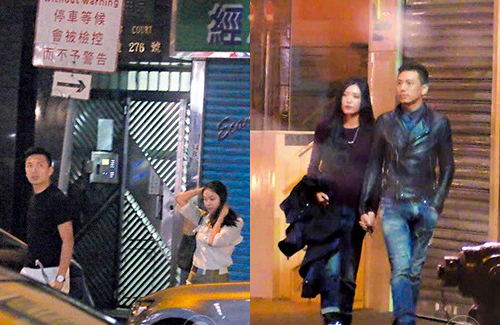 Unlike her relationship with Dayo Wong (黃子華) in the sold-out stage play Skylight <前度>, Fala Chen (陳法拉) and her ex Daniel Sit (薛世恒) have truly gone their separate ways.

The former TVB star and the Neway heir were rumored to have married in 2008, but this was never confirmed by Fala. In 2013, Fala acknowledged that she had already separated with the 38-year-old Hong Kong businessman, but refused to elaborate on why due to privacy reasons.

While Fala escaped the paparazzi by going to New York to pursue a master’s in acting, Daniel stayed in Hong Kong and remained a hot topic of gossip for the paps. The bachelor was briefly linked with Oceane Zhu (朱璇), and was also rumored to have dated Bernice Liu (廖碧兒), but this was denied by Bernice. Coincidentally, both Oceane and Bernice were Miss Chinese International alumni, like Fala.

But Daniel’s real girlfriend isn’t a Miss Chinese International winner. The paps recently spotted Daniel out with an unfamiliar woman on several occasions. The woman looked to be about 30 years old, with long black hair and gentle, pretty features. The two were seen casually walking in the streets with their hands linked.

The couple were spotted together again in Causeway Bay a few nights ago, but they kept their distance as they walked to the parking garage to retrieve their car.