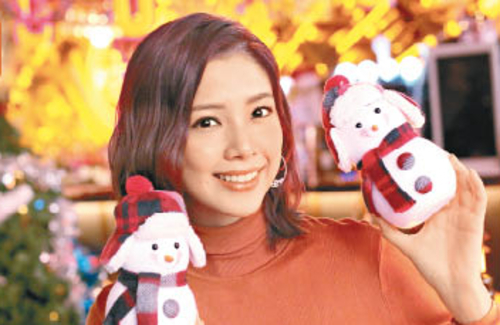 With Christmas coming up, Miss Hong Kong 2018 winner Hera Chan (陳曉華) revealed in an interview that she prefers to spend the day looking at Christmas lights and having hotpot with close friends rather than partying or going on dates. The 24-year-old further shared that she is traumatized by what her ex-boyfriends did to her on Christmas Day. Possessing elegant looks and a tall figure, it’s hard to imagine the beauty queen would have unpleasant Christmas dates, but Hera said she went through it twice.

She expressed, “I hand-knitted a scarf for my first boyfriend, but he didn’t appreciate it and left it at my house. Later, I also knitted one for my second boyfriend, but it ended up the same – he didn’t take it.”

Hera added that her scarves turned out really well. “All my family members accepted it, and they would wear it too! Maybe it’s because [my ex-boyfriends] didn’t like me enough; it definitely left quite a wound, and that’s also why I wouldn’t knit one for my next boyfriend no matter how much he may want it.”

The starlet revealed she started raising a dog to keep her loneliness at bay during the festive season. She is also currently focused on improving herself and will think about dating when the right person comes along. However, she admits she tends to prioritize her partner and neglect herself when she’s in a relationship.

As for now, she is practicing self-care and stays away from clubs. Unlike most young adults, Hera dislikes the loudness of clubs. Sometimes, she would go to the bar with friends, but she prefers to quietly drink tea at home and plan out future traveling adventures.