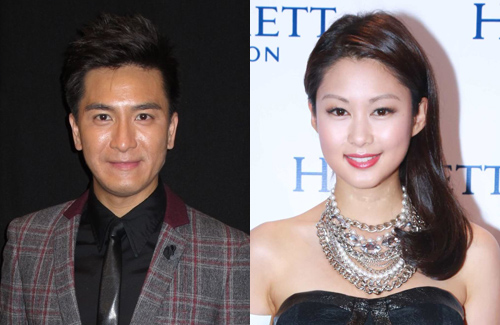 With his rise in popularity and wholesome image, Kenneth Ma (馬國明) has become a hot commodity that TVB actresses are reportedly flocking to. Following Rebecca Zhu (朱晨麗) and Natalie Tong (唐詩詠), Kenneth’s name is now romantically linked to Eliza Sam (岑麗香) after he admitted they attended a barbecue together.

Kenneth turned 39 years old on February 13 and had celebrated with several friends, including Natalie Tong, at Jazz Lam’s (林子善) cafe. After the celebration, it was rumored that Kenneth and Natalie were secretly dating for 3 months.

Kenneth denied the news and said he treated Natalie like his younger sister. “Her personality is good, but I don’t know how she’s doing [with Amigo Chui 崔建邦]. Actually, we will not ask each other about love matters.” If Natalie were single, would Kenneth pursue her? “I don’t know. The requirements for a friend versus girlfriend are different.”

While addressing his rumors over Natalie, Kenneth leaked that he and Eliza Sam had joined a director’s barbecue party. Reporters had already received insider tips that Kenneth and Eliza were at the same party and questioned him on what he thought of her.

“Everyone is interested in my love life more than my own mother! I knew what [the press] was trying to ask because I attended a gathering with Eliza and other crew members earlier.” What was Kenneth’s impression of Eliza? “No matter which girl you ask about, I always say she’s good!”

Although praising Kenneth highly, Eliza laughed off the rumors. “It’s my turn now! Actually, there ‘s nothing between us. I expect that there will be such rumors working in the industry.” Eliza added, “Kenneth is a very nice guy. I didn’t consider whether there are any development opportunities. I heard many girls think of him as a Diamond Bachelor. I came back from overseas, so I’m not too sure about everyone’s background.”

While filming Silver Spoon, Sterling Shackles <名媛望族> last year, Kenneth had admitted that he was attracted to Rebecca Zhu during filming. When the press questioned Rebecca about Kenneth’s rumors with Eliza, Rebecca sounded jealous on the phone, “It’s best to ask them these questions directly. Earlier, he said he wished for more rumors. Now there are more rumors; congratulations for his success.”

Denying that she felt jealous, Rebecca said that Kenneth was a friend she has not seen in a long time, although she had sent him New Year greetings. “He’s filial and a great guy. I quite admire him and he’s a Diamond Bachelor! However, we’ll let additional developments run their natural course. I will focus on work now.”

Hong Kong feng shui master, Chan Tze Choi <陳子才> said that Kenneth, who is born under the tiger sign, will likely get married in 2018 or 2019, “Last year, Kenneth had a chance in meeting his partner. However, the relationship was elusive and will trouble him until this year. Born under the sign of a rabbit, Rebecca Zhu is fated to have several foggy relationships, easily attracting others’ romantic interest. However, she will have a chance to meet her marriage partner after she turns 30 years old.”

The feng shui master determined that Kenneth and Eliza’s facial features were incompatible and thus the chance of a relationship was low.