Earlier, the Hong Kong government announced the new anti-epidemic measures to prohibit people from gathering in groups of more than four people. Also, restaurants are only allowed to serve half of their maximum capacity, and the distance between the tables must be placed 1.5 meters apart. Six different types of entertainment venues must also remain closed. In response to the government, TVB City in Tseung Kwan O has adopted new measures to keep everyone safe.

Kenneth Ma (馬國明), who was filming BB on Top <BB大晒> at TVB City with Kiki Sheung (商天娥) a few days ago, revealed the cafeteria suspended the supply of side dishes for the time being to prevent people from sharing dishes. “We’re not allowed to gather at the same table for now,” Kenneth revealed. “It’s not as lively as back then. You can only order a dish for yourself and eat with just a few people. It can’t be helped. It’s better to be safe than sorry.”

The cafeteria ensures a certain distance between the tables and posted notices in prominent places to remind people to take precautions. In addition, only four stools are provided per table. Kiki smiled and said she mostly eats with 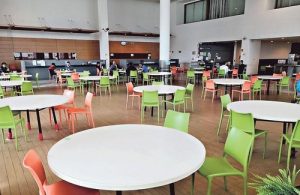 Eliza Sam (岑麗香) and both of their assistants, so they don’t invite Kenneth to eat with them, as there are already four people in their party.

Although TVB takes the body temperature of those entering the studios and requires them to use disinfectant hand sanitizer, Kenneth shared that his sister bought him hand sanitizer to hang on his bag for easy access. He also wears a mask whenever he is not working.

Regarding the closure of movie theaters, Kenneth expressed he has been busy filming lately, so the closure has little effect on him. However, he is a little saddened by the closure of the soccer fields and fitness rooms. “I haven’t played soccer in three weeks,” Kenneth said. “My friend said that the sports field is closed, and even the gantry has been removed. Since the gym is also closed, I can only lift dumbbells at home.”

He laughed and added that he can watch The Hippocratic Crush II <On Call 36小時 II> with his sister. “It’s pretty good, pretty interesting,” Kenneth said. “In the past, netizens told me to pursue Tavia because we look good together, but unfortunately, I lost to Him Law.”

On the topic of Him Law (羅仲謙) and Tavia Yeung (楊怡), the reporter mentioned that the couple’s baby is due in May. However, Kenneth said he’ll have to wait until the pandemic passes to meet the baby, but he will keep in touch with them. “Recently, I have not gone out to eat much. I usually stay at home. I have not seen Lam Tsz-sin’s (林子善) baby either. I’ll pay a visit later on. Hopefully, the pandemic will pass soon.”