It has been a while since many have seen Nancy Wu (胡定欣) on screen even though she has three dramas on hand. The 40-year-old actress recently guested in episode one of TVB variety show Oppa’s Cuisine <男神廚房>, and she was excited to taste all the delicious foods the male stars will be preparing.

Alongside new mother Tong Yee (湯怡), Nancy was given the opportunity to judge an all-male cooking competition. “I haven’t eaten something made by a man in a very long time. It is a bonus to see which handsome male artiste can cook.” When asked if she would give more points to the artistes who show off their muscles, Nancy laughed that it would be a better sight saved for the male artistes’ family.

It has been almost two years since viewers have seen Nancy on screen. Although the filming for Big White Duel 2 <白色強人> is completed, it will likely not air until 2022. Asked about the lack of screen visibility this past year, she responded, “I am not concerned because I have been filming, but the dramas just haven’t been released yet,” and added, “We need to wait for the right timing for it to broadcast.”

After filming Big White Duel and Shaw Brothers’ ICAC Attack <廉政狙擊> this year, Nancy’s upcoming project will be The Strongest of All <破毒強人>, which will begin filming at the end of this year.

Many Hong Kong artistes, including her good friend Myolie Wu (胡杏兒), are earning ideal incomes in China. Mentioning that she may have a potential Chinese project in discussion, Nancy said, “It has been difficult to organize with the pandemic. There is a lot to take into consideration.”

If given the chance, Nancy would be interested in participating in a Chinese variety show. “I have watched a lot of their variety shows, and they do an excellent job. I really want to try it out myself, because the effects are incredible and I want to learn more.” Given her background in singing and dancing, she really hopes to take part in her favorite show Sisters Who Make Waves <乘風破浪的姐姐>.

Known for her active lifestyle, Nancy is passionate about running and recently tried playing tennis with her father. Given her athleticism, it is surprising it was actually her first time playing tennis. “I wanted to take on a sport with my father, and I am loving it. I might even hire an instructor to teach me how to play.” She has become immersed in the sport, and revealed that she loves watching tennis matches at home. 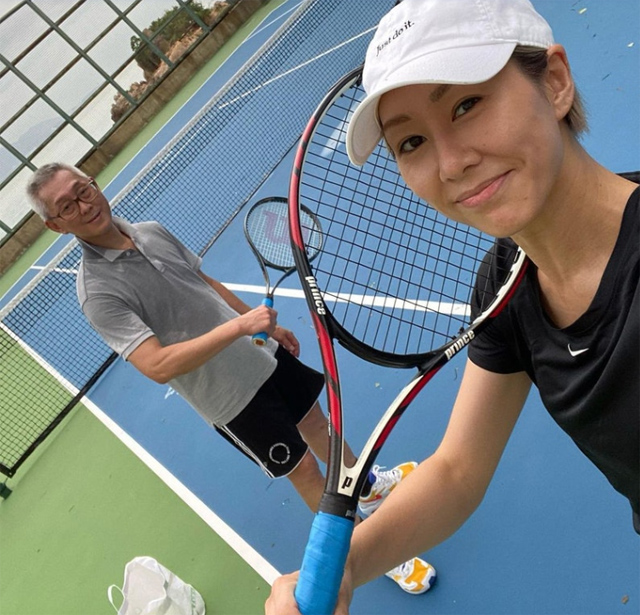