The following article contains spoilers for TVB’s Another Era.

Niki Chow (周勵淇) and Benjamin Yuen (袁偉豪) were a tragic couple in the TVB drama Another Era <再創世紀>, which completed its broadcast today. Their love came to a tragic ending when Ben was killed, and although his character never made it to the last episode, Ben has managed to make up the lost time with Niki.

The onscreen couple went “on a date” recently, walking around the streets of Hong Kong and taking random selfies. Niki said their time together reminded her of when she used to be in a relationship. “It really was like this. We’d eat eggettes together, and I’d feed my boyfriend. We’d talk, walk around Stanley. It was simple, but we were pretty happy.” 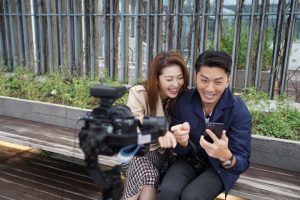 Ben said he prefers to ride around his motorcycle. “My life isn’t luxurious at all. It’s very down-to-earth. I prefer going to places where there would be people.”

Another Era is Niki and Ben’s first television drama together, but they shared that they actually met many years ago, back when Niki was still a model and Ben hasn’t yet debuted. “I would say about 18 years ago. We met in an underground train. I think our meeting was kinda of similar to the main characters in ‘Few Minute’s Date’ <幾分鐘的約會>. So today, I will record that song for you. I hope you like it.”

Ben performed the Danny Chan (陳百強) song in front of Niki, and Niki teamed up with Ben to reenact the music video. Niki told reporters that she actually didn’t remember Ben at all when he brought up to her about their first meeting. Ben said, “I even waved at her, and she nodded at me… but she was already a goddess then.” Ben then continued to joke, “Do you know how early I woke up just for this job? You told me 2 o’clock and I got up at 8! I need to get rid of my puffy face!”

Benjamin easily loses his cool when provoked, and has a history of fiery exchanges on social media.

Benjamin Yuen did not take the negative comments lightly.