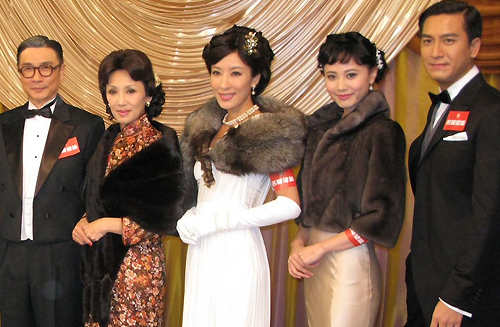 The drama follows the lives of a large, rich, and influential Chinese family living in British Hong Kong during the 1920’s and 30’s, a time when eastern and western cultures clashed, and women began to fight for a position in society to change the traditions of a woman always coming second behind a man.

Although wealthy and renowned barrister, Chung Cheuk Man (Damian Lau) studied abroad in England and enjoyed a western lifestyle, deep down he is still a traditional Chinese man. Similar to many upper class during that era, Cheuk Man has many wives and mistresses, a symbol of his status. His first wife Koo Sum Lan (Mary Hon) was born from a wealthy family. His second wife, Aisin Gioro Yee Yin (Idy Chan) is an former princess from the Qing dynasty. His third wife, Yvonne Yik (Elena Kong) came from a rich banker family. Peking opera singer Hong Tsz Kwan (Tavia Yeung) is the fourth wife. The fifth woman in Cheuk Man’s life is Chiu Dan Dan (JJ Jia, who was only interested in living a luxurious and materialistic lifestyle.

Of the five women, Cheuk Man’s most beloved is Tsz Kwan, but she is a very strong advocate in women’s rights, with her opinions always clashing with the traditional Cheuk Man.

The drama also portrayed the differences between the Cheuk Man and his children. Due to the strict lifestyle and teachings of Cheuk Man, his two sons, Chung Kai Sun (Kenneth Ma) and Chung Kai Wah (Vincent Wong 王浩信）had constant arguments with their father, and his daughter, Chung Ho Yee (Sire Ma 馬賽）married a poor policeman against the family’s will.

As arguments between the Chung’s family members intensify, another foe of the family caused further complications. Kam Muk Shui (Ron Ng) has strong feelings for  Kwai Siu Yau (Rebecca Zhu), who came from the same orphanage. Angered by losing Siu Yau when she married into the Chung family as Kai Sun’s wife, Muk Shui decided to plot his revenge by involving himself with the members of the Chung’s family.

The elite family may seem brilliant on the outside, but deep down it was being torn apart….