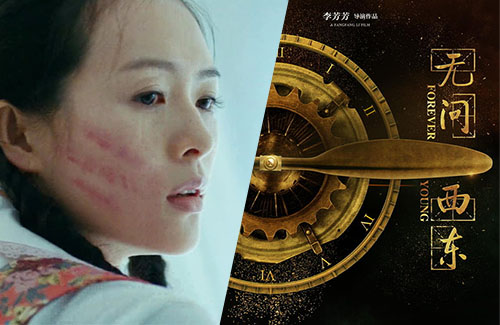 When the pan-generational film Forever Young <无问西东> was released on January 12, online critics did not give the film a favorable review. Many websites that provide film reviews, such as Douban, Maoyan, and Taoban, gave the film a poor rating, and one-star reviews among users were near universal.

This was a huge contrast to reviews coming from critics who had watched the film’s premiere at Tsinghua University. Reportedly, the audience applauded a total of 26 times throughout the film; preliminary comments on the film were positive, with critics calling Forever Young a “heartfelt” and “vibrating” film, and “a film filled with love and respect for others.”

Forever Young is a drama film written and directed by Li Fangfang (李芳芳), and has a story spans four generations in China, starting with the end of World War II in the late 1940’s. It stars Zhang Ziyi (章子怡), Chang Chen (張震), Huang Xiaoming (黄晓明), Leehom Wang (王力宏), and Chen Chusheng (陈楚生) in lead roles, and was made in celebration of Tsinghua University’s 100th anniversary. The film was originally slated for a release date in 2014. Faye Wong (王菲) lended her voice for the film’s theme song.

Despite its initial poor online reviews, the film had a historic bounce back mediocrity. Thanks to good word-of-mouth and supportive movie-goers, Forever Young sneaked up from being the month’s worst movie to the month’s best. Within 48 hours of the film’s release, Douban ratings went from 6.2 to 7.4, an increase never seen before. Some reviewers said they took their grandparents to watch the film with them, exclaiming that they’ve never come across a film where the story could resonate with all generations of their family.

Many critics were upset and confused at the initial “smear campaign” against the film, which alerted industry officials. Some critics blamed the bad reviews on the “navy” (水军), a slang term referring to individuals or companies that pay other people to slander competitors.

Well known film critic Tian Jinshuang (田金双) said, “You can choose to like it, or not like it, but you cannot trample on the entire industry. Releasing the navy to maliciously attack [the film] is definitely a shameless act.”

In regards to the speculation of a “navy” performing a smear campaign against the film, the representatives of Forever Young stated, “We are willing to accept criticism under any circumstance. However, this kind of malice is a cancerous tumor to the entire industry. This is no different from suicide for the Chinese film industry.”

Yin Hong (尹鸿), the vice president of the China Literature and Art Critics Association, stated, “Hopefully the malicious reviews from such toxic competition would not affect the broadcast of a good film. After enjoying the film, if you still think Forever Young is a production worth recommending, please give it a like. Let a point of malice receive a point of positivity.”

In terms of box office, Forever Young grossed 50 million yuan on its second day of release, a 35 percent increase from the first day. It ultimately grossed 85 million yuan after two days.