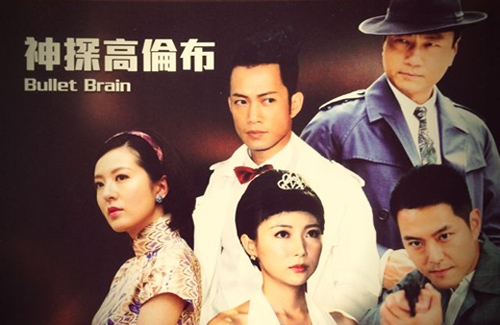 Produced by acclaimed TVB producer Lee Tim Sing (李添勝) and with a script helmed by returning scriptwriter, Ip Kwong Yam (葉廣蔭), Bullet Brain has a total of 25 episodes. In contrast to previous detective dramas, the character-driven storyline of Bullet Brain only centers in on one murder case – a gruesome case that involved a wife dismembering the body parts of her husband and slowly cooking them.

Set in 1960s Hong Kong, the serial tells an intriguing story on the kind but gullible Ko Dai Hei (Wayne Lai), a stowaway who escapes to Hong Kong. There, he meets his father’s friend Kam Lo Yik (Joe Junior), a top police executive, who recruits him into the Hong Kong Police force.

Hei takes a bullet in the head in an accident. Although he recovers quickly from his injury, the wound dramatically alters his personality. The fragments of the bullets have activated Hei’s brain cells, turning him into a genius. Cracking numerous mystery cases almost single-handedly, Hei soon makes himself known as the British colony’s legendary detective. Despite the glory, Hei’s newfound brain turns him into someone churlishly cold, heartless, and ruthless. However, Hei retains a bit of his older compassionate personality whenever he is around his best friend and crime fighting partner, Pao Ping On (Ngo Ka Nin).

After meeting the courtesan Szeto Nam (Natalie Tong), who highly resembles his former lover Mui Mui, Hei takes another deeper step into darkness. Wanting to pull Hei back out to the light, On tries to devise ways to revive Hei’s older personality. The plan nearly backfires as On injures Hei in the process. Hei’s personality goes through another big change once again.