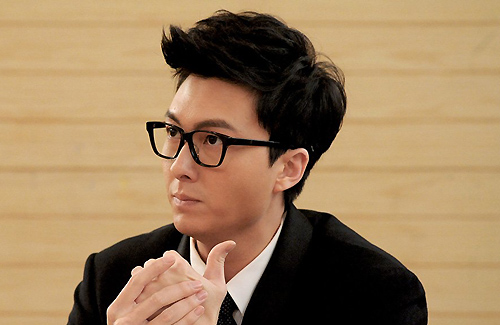 Having starred as the incompetent Jimmy Chung in last year’s Silver Spoon, Sterling Shackles <名媛望族> and the cheating Gilbert Sun in this year’s anniversary drama Will Power <法外風雲>, Vincent Wong’s (王浩信) unlikable roles did not settle well with the audience. Though praised for his convincing performances, Vincent said he was depressed throughout the duration of shooting Will Power earlier this year.

“Not only did [my character] want Fala Chen (陳法拉), he also desired Sire Ma (馬賽). Then he was pressured to do drugs, and also raped Sire. During the times I filmed these scenes, I couldn’t really go to sleep. I wasn’t in my best mental shape, and I also started drinking. Later my wife said I wasn’t looking too good and convinced me to go see a doctor. The doctor said I was in minor depression.”

The pressure to care for his one-year-old daughter only added more stress to his already stressful career. Vincent admitted that he felt more depressed having to worry about earning money and planning for his daughter’s future, but quickly learned how to turn the pressure into motivation. “Now that I’m a father, I’ve gained more knowledge and my sense of responsibility also increased.”

Vincent made headlines last year after costar Damian Lau (劉松仁) threw thirteen hard slaps on Vincent’s face in a scene for Silver Spoon, Sterling Shackles. The intensity will increase this year with Will Power, as Vincent received twenty slaps on the face from Susan Tse (謝雪心).

“I’m getting slapped by people every year,” said Vincent with a laugh. “The audience seems to anticipate these scenes from me. It leaves a deep impression on them.”

43 comments to Vincent Wong Suffered Depression While Shooting “Will Power”