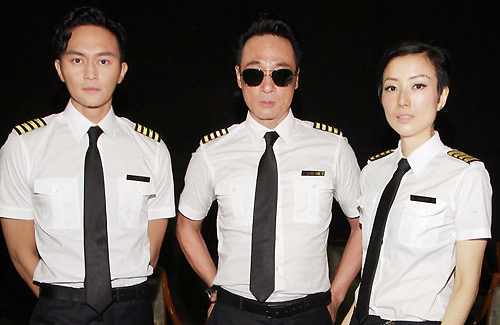 The cast and crew of the movie version of Triumph in the Skies <衝上雲霄> gathered together on August 3 to attend a blessing ceremony. The film, a co-production between TVB, Media Asia Films, and Shaw Studios, is the big screen adaptation of the popular TVB drama series of the same name, which starred Francis Ng (吳鎮宇) in the central role.

The first part of Triumph in the Skies premiered in 2003 to nearly record-breaking ratings and critical reception. Its sequel aired in 2013.

The film version of the pilot drama sees Francis return as Hong Kong’s first Chinese pilot, Captain Sam Tong. Chilam Cheung (張智霖), who starred as Skylette Airline’s senior pilot Jayden Koo in Triumph in the Skies 2, also appears in the film. Elena Kong (江美儀) reprises her role as Skylette Airline’s senior stewardess Heather Fong. Oceane Zhu (朱璇), who made a guest appearance in the first two episodes of Triumph in the Skies 2, also has a supporting role in the film.

Keeping the franchise fresh, the movie also underwent a few new cast additions. Louis Koo (古天樂) has joined the cast to star as the owner of an airline. Singer-songwriter Jun Kung (恭碩良) also stars in a prominent role. Taiwanese actress Amber Kuo (郭采潔), who was absent at the press conference, will star as Louis’ girlfriend.

Sammi Cheng (鄭秀文) and Charmaine Sheh (佘詩曼) star as the film’s two female leads. Sammi appeared in a short-sleeved pilot outfit, which showed off the tattoos etched around her neck and arm. Sammi’s unique appearance garnered the most attention at the press conference, but the Cantopop diva denied revealing what kind of character she portrays, insisting everyone should watch the film to find out. Rumored to portray  Fala Chen‘s (陳法拉) Holiday Ho earlier, Sammi will instead portray an entirely new character.

Charmaine, on the other hand, portrays a stewardess – a first in Charmaine’s acting career. Charmaine revealed that her character will share an interesting relationship with Louis’ role.

Triumph in the Skies is produced by Tommy Leung (梁家樹) and co-directed by Wilson Yip (葉偉信) and Matt Chow (鄒凱光). 93 comments to “Triumph in the Skies” Movie Holds Blessing Ceremony