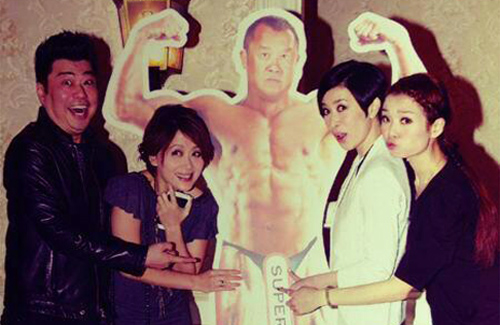 Eric Tsang (曾志偉) gathered his family and 300 of his good friends at Disneyland for a private birthday bash on April 14. Media who crashed the party revealed the artists spoiled the image of Disneyland by using expletive language in their songs. The artists also broke Disneyland’s regulations by smoking in the compound of the children-friendly amusement park.

When asked why he had chosen Disneyland as his birthday venue, Eric said, “I reserved the park because many artists don’t have the opportunity to go out and play at theme parks. I just want my friends to enjoy themselves with their families.” The party was so wild that the usually composed Tony also drank up a storm and at one point, embarrassed himself when he threw up heavily and had to lean on others to walk.

Eric Expresses Himself Through Profanity

Coincidentally, Eric attended a Caring for Children Foundation’s Sesame Street musical publicity event yesterday and was asked by reporters if he thought his actions at his birthday party were a bad influence to the children. Eric clarified that the party only started after 10 PM when all children were sent off the Disneyland grounds.

“I thought it was a private party. We only partied so wildly after we closed the doors to the public. This is my way of expression. I am a big kid and I love to party hard; Anita Mui (梅艷芳) used to scold me too. I often ask people not to send me to the stage because I always sing songs with lots of expletives.” Eric emphasized once again that he had arranged for different celebrations to set aside private time in order to celebrate with his own friends. He had not expected outsiders to crash his party.

Nevertheless, Eric apologized and denied that he has made insinuations in his party that Charmaine Sheh loves to use foul language in her speeches. He further added that he was only rapping meaninglessly. Stressing that he just loves to live in the moment, he claimed to forget everything that has been done at the party once it ended.

Regarding the smoking incident, Eric admitted that he was the one who broke the rule by asking everyone not to smoke outside the banquet ballroom as reporters might take photographs and spoil the image of Disneyland.

Responding to Eric’s profanity-ridden singing, in which he invited her to share the stage together, Charmaine laughed, “We were too happy and noisy that night. I didn’t hear what was sung or said.” Did that mean that Charmaine frequently used profanity? “Just kidding! That night, we were all close friends. As a family having a [private party], we could joke about anything. There’s no need to be upset!” Asked if she used profanity, Charmaine said, “I don’t believe that there is anyone who doesn’t curse. But it depends on the occasion and what’s happening.”

Kenny Chung left a message on his Weibo yesterday, “It was with good intentions that we held a private party. Since we are all adults, we were merely having fun while bringing others joy too. We never harmed anyone so what’s wrong with us breaking out in songs with expletives?”