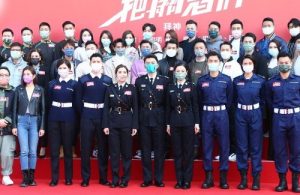 The Gatekeepers will be Ben and Mandy’s first collaboration as a married couple, despite it being their tenth collaboration overall. “We don’t have many intimate scenes,” said Ben. “We play an old couple—partners who have dated for many years and then finally married.”

“Our intimate scene is [Ben] washing my hair and helping me take a bath!” said Mandy with a laugh. “This drama is going for a very realistic approach of relationships in general.”

“We do share a lot of bed scenes,” Ben clarified. “Don’t worry. None of them are action-packed,” he joked. He also revealed that their relationship would hit a rough patch, sharing, “We eventually go through a miscarriage.”

Carlos and Venus play members of the drug bureau under C&ED. “I guess you can say this is my first ‘costume’ drama,” said Carlos. “I’ve had experiencing playing a disciplinary force member before, but I didn’t have to wear uniforms then.”

Playing a probationary inspector, Carlos chuckled at the thought of his upcoming action scenes. “I’m a bit concerned. I’ll have a lot of uphill chase and water sequences. In a few days I’m going to film a scene in the rain, and I’ll be jumping in the water. I don’t know how I’m going to tape down my hot packs.”

Venus, who plays Carlos’ supervisor, is still getting used to her uniform look. Venus described her character as “mean and strict”. She joked, “My roles as of late are all pretty mean. When will I get the chance to play myself?”