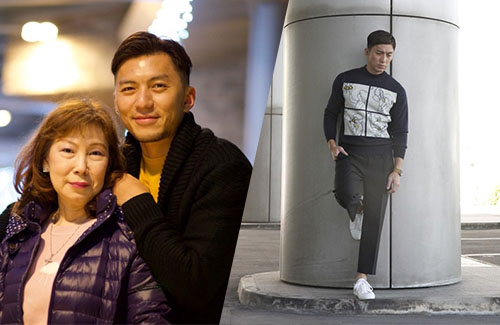 The 36-year-old had a rough road to stardom. After being introduced to the entertainment industry in 1997, he took up random acting and modeling jobs until 2007, when he won the Mr. Hong Kong contest hosted by TVB. Playing minor rolls, Benjamin got cast in his first major role in 2011 for The Hippocratic Crush <On Call 36小時>, which was a hit in Hong Kong. After a series of more supporting appearances in TVB, he scored a popular hit with A Fist Within Four Wall’s “Ngah Lo”, his most popular role.

When he received his Most Popular Male Character award at the TVB Anniversary Awards, Benjamin immediately thanked his mother. Recalling his tearful speech at the awards ceremony, Benjamin said, “I’ve always been very grateful of my mother. My mother, my grandmother, and my relatives from that side of the family have always took great care of me. My [paternal] grandmother as well. She passed away last year. She was 104 years old, a laughing funeral, but when she passed, I wasn’t by her side. I feel regretful.”

“About five or six years ago, my father was diagnosed with nasopharynx cancer. He’s cured, but he struggled with lung problems after that. He’s seen doctors from both public and private hospitals. Medical bills are expensive, he’s also taking traditional Chinese medicine. There’s definitely a financial burden. Because of the nature of my work, I can’t always be there for him. My mother has been taking care of him. All I can do is to support them financially and speak with my mother every now and then to talk about my father’s condition.”

Benjamin is touched for his mother’s sacrifice to his family. He wants to do the same. “Those around us have been very supportive of my family. My mother sacrificed a lot for us, whether it’s money or time. A few years back when I wasn’t making enough money, my family had to step in to help out. I want to do the same now, become my family’s breadwinner, and do everything I can to help them. I want the world to know how brave, sacrificing and loving my mother is. My father’s health has really took a toll on her.”

Though 2017’s Line Walker: The Prelude <使徒行者2> earned mixed critical reviews, Benjamin’s own performance as “Tin Tong Gor” was praised. The role was challenging for Benjamin to portray, as his character’s personality is quite different from his own.

Asking if he finds “Tin Tong Gor” to be one of his representative works, Benjamin said he also likes The Fixer’s <拆局專家> “Shek Tau”, Speed of Life’s “Szema Sir” and A Fist Within Four Wall’s “Ngah Lo.”

He said, “I really want to thank the writers. I want every drama to become a representative work, and not just one to two.”

His Line Walker costar Priscilla Wong (黃翠如), however, did not get as lucky as him. She was criticized for doing poorly in the role, although her “three-part crying scene” near the end of Line Walker earned praise.

Benjamin defended Priscilla against her criticizers, saying, “She works really hard to do well, and she really wants to continue learning. But netizens have all been very harsh on her, and because of that, she ends up losing confidence. I find it unfair. Many people see her improvement, but why do you still have to push her down a hole and bury her?”

No Regrets for Showbiz Career

Asking if he dreams to win Best Actor, “It’s something I never really thought about, but I do think it’s an appropriate goal to have. However, if I keep treating each of my performances as an exchange, then that would just pile more stress on me. I rather enjoy the moment so the audiences would be able to see more sides of Benjamin Yuen. I also want to be healthier, and be able to use my power in helping other people. Do more charity.”

In the past 20 years, has there been a moment where Benjamin regretted joining showbiz. He said, “No regrets at all. I don’t think there’s many to regret in life, because I do believe in destiny. I am who I am today because of what I went through in the past 20 years.”

8 comments to Benjamin Yuen Works Hard to Support His Parents