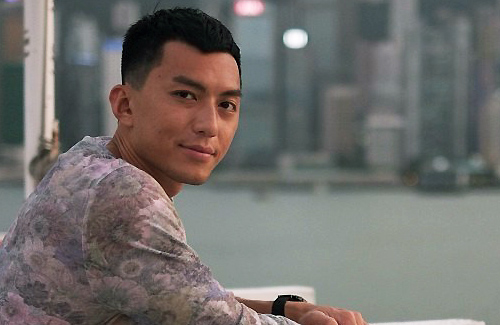 Although it may seem that Benjamin Yuen (袁偉豪) is relatively new on television screens, he has floated in the entertainment industry for almost fourteen years. However, his career was at a standstill, which prompted him to enter the 2007 Mr. Hong Kong competition to boost his luck. Five years later, Benjamin’s TVB career looks promising, playing supporting roles in The Hippocratic Crush 2 <On Call 36小時 II> and Tiger Cubs 2 <飛虎 II> series.

With his good looks and fit physique, Benjamin was offered many opportunities in the earlier part of his life. In 1998, when he was only 18 years old, he starred in a Vitasoy commercial and became a model. Shortly after, Benjamin interviewed with TVB, but the station hired another applicant, Bosco Wong (黃宗澤), instead. Benjamin found work in the film industry, but switched to backstage work in 2004, learning filming and post-production techniques.

Benjamin spoke of his disappearance onscreen, “I couldn’t help it; as I didn’t know how to handle interpersonal relationships. Eventually, I faded away.”

Benjamin worked at a clerical job for three months, but decided that the repetitive nature was not for him. He obtained a fitness trainer license at the time. Hoping to have a second chance in the entertainment industry, he quit his clerical job and entered TVB’s Mr. Hong Kong competition in 2007.

Wearing a tiny pair of swimming briefs before a live audience and millions of viewers in the Mr. Hong Kong contest, Benjamin knew exactly what he hoped to accomplish. “It was a milestone. I set my target and restarted on a brand new journey that I never knew. Now that I’m in [TVB] for five years, I can say that I did not let myself down with the results I have obtained.”

In a conversation years ago with Wayne Lai (黎耀祥), Benjamin was asked what he wanted to get out of working as an actor. Benjamin’s answer at that time was a materialistic, “I want a Ferrari.” But now, Benjamin sees acting as an opportunity to extend his experiences in life. “Actually I really can learn a lot in TVB. A year in here is like ten years outside. Every day I face different challenges. Very happy that I can train my mentality.”