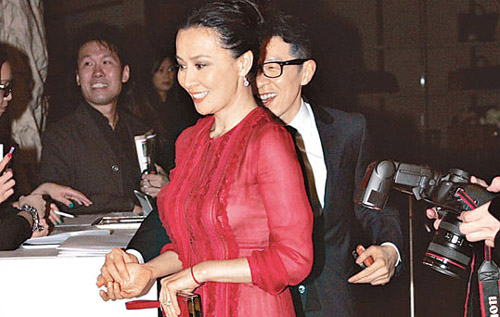 Reports emerged yesterday claiming that Carina Lau (劉嘉玲) and Tony Leung (梁朝偉)–who were eager to become parents–took Sandra Ng’s (吳君如) advice to find a a surrogate mother to carry their baby. Allegedly, Carina and Tony traveled to the United States in May to find a surrogate mother agency to research the matter.

Last week, when Carina was eating out with Tony’s mother, reporters asked her about the surrogate mother rumors. At the time, Carina replied with a smile, “Whether it is true or not, I will not answer!” Carina’s response increased the authenticity of the allegations!

However, on her blog yesterday, Carina responded to the recent rumors through her simple response, “It’s nonsense!” Perhaps it was Carina’s attempt to stop the rumors from spreading further.

Jayne: If Carina and Tony did want children, why not consider the surrogate mother option? They can certainly afford it!