Cecilia Cheung Pulls Sons Out of School Once Again 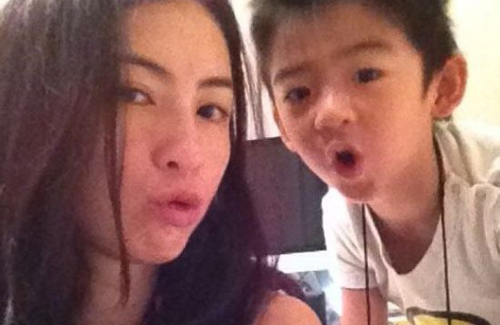 Negative gossip follows Cecilia Cheung (張柏芝) wherever she steps foot. In a recent Singapore vacation, Cecilia was accused of flirting with various men while on a wake-boarding trip. Cecilia appeared in a bikini while surrounded by topless, muscular men. Accompanying Cecilia were her two sons, 6-year-old Lucas (謝振軒) and 3-year-old Quintus (謝振南), who were once again pulled out of school to take their vacations.

Netizens shared photos of Cecilia and her sons as they were spotted at various locations in Singapore, including at an amusement arcade. While Cecilia may have intended to take her sons on a fun trip, her parenting style is once again being criticized as being irresponsible in making the boys skip school for leisure activities.

Although no dates were found on the travel photos, it was reported that the principal of Lucas’ school has already issued a last warning letter to get him back to school. Even father Nicholas Tse (谢霆锋) has claimed that he is looking into the matter.

While it was not stipulated in the Education Ordinance the minimum number of days a child must stay in school in order to comply with the Education directive, parents must have a valid reason for their children to miss school. By the number of warning letters the school has been issuing to Lucas, it is apparent Cecilia has not provided a valid reason for Lucas’ absences. Even then, she does not seem to be affected much by the warning letters, as she continues to have a good time with her sons while travelling.