Charmaine Sheh (佘詩曼) is known to be a filial daughter. Having grown up in a single-parent household, Charmaine learned to cherish her mother and those around her at a young age.

Raised by a Single Mother 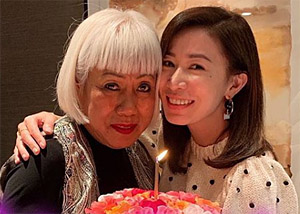 However, one time, Charmaine hated herself for not being with her mother. In 2005, Charmaine’s mother was having a cardiothoracic surgery in the United States while Charmaine was attending an award ceremony in Beijing. As Charmaine walked on the red carpet, she received a call that there was a complication in the surgery and her mother’s heart stopped beating for 20 seconds. The doctor told Charmaine to prepare for the worse; her mother might get amnesia, or she may never wake up.

Upon hearing the news, Charmaine broke down and wanted to cry. Even though she wanted to fly to the United States to be with her mother, Charmaine didn’t have her passport ready. At that time, she hated herself for being an artiste. Charmaine held back her tears even as she won the most popular artiste award. Charmaine could only tell herself to control her emotions as the audience cheered for her.

Showing her mature personality, Charmaine had once said, “Every time I won an award, I tell myself that I have to keep doing better. This is not only a promise to my mother, but it’s also a promise to the audience. Saying this is easy but putting this in action is hard. I know my mother will not want me to give up half way.”