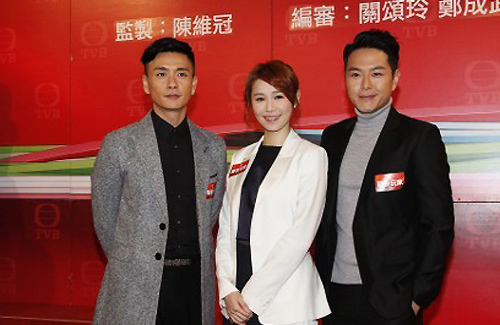 At the initiation ceremony for the drama, Priscilla remarked, “I was so surprised! They actually asked us to play an onscreen couple.”

Edwin added, “In the drama, our characters go through a very tumultuous relationship, from initially falling in love, to subsequently having a huge misunderstanding. One of us then leaves for the United States and eventually returns to Hong Kong to try and win the other person over. There is also a scene that is an absolute romantic classic. It contains so many beautiful lines.”

On whether there will be a bed scene, Edwin laughed and said, “Yes, but it’s with Louis Cheung (張繼聰). In the drama, his character sublets a room from me. One night, he mistakes my room for his, and accidentally enters my room. I have very few bed scenes with Priscilla’s character, as her character apparently sleepwalks at night.”

As for whether there will be kissing scenes, Priscilla said coyly, “At the moment, I don’t know. We’re still filming the part where our characters are just friends.”

Bosco Wong (黃宗澤) will portray an owner of a Public Relations firm, who uses questionable tactics to achieve his ambitious goals. In the drama, Bosco is married to Elaine Yiu (姚子羚), keeps a mistress (Moon Lau 劉佩玥), and is also involved with Priscilla.

Bosco pointed out that the producer hopes to reflect the darker sides of society, in which many successful married men have extra-marital affairs. Asked if this is what he desires in real life as well, Bosco said, “No, it’s very troublesome. If one woman is difficult, then two would be even harder. Currently, I don’t even have [any woman in my life].”