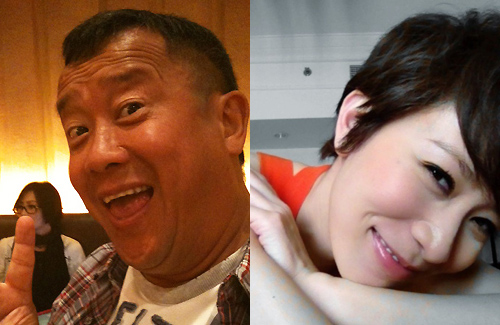 Celebration is still ongoing for Eric Tsang (曾志偉) 60th birthday. With wild parties held at convention halls, clubs, hotels and even Disneyland, Eric was recently been treated to a dinner at a hotel in Tsim Sha Tsui by TVB Chairman, Norman Leung (梁乃鵬). Many ex-TVB artists were invited, including Charmaine Sheh (佘詩曼). It was alleged that the party was just a cover-up to cajole Charmaine to return to the television station.

After filming 2011’s Let It Be Love <4 in Love>, Charmaine left TVB to focus on the mainland Chinese market. As Charmaine’s management contract with China’s Creative Entertainment ended in March, HKTV, Now TV and Emperor Entertainment have been competing to sign Charmaine due to her ratings guarantee. Now TV’s Mui Siu Ching (梅小青) used her close relationship with Charmaine to persuade her to sign a contract. Charmaine admitted that she had met with NowTV earlier.

TVB is also interested in winning Charmaine back, even to the extent of using Eric Tsang’s birthday as the perfect opportunity.

An insider revealed, “Charmaine still owed TVB one series. It was initially planned for her to begin filming in April for You’re Hired 2 <絕代商驕> with Dayo Wong (黃子華). But due to conflicts with Charmaine’s work schedule and to prevent further delays for Dayo, Kate Tsui (徐子珊) was chosen instead.”

Charmaine is now given the option of choosing her own costar for her next TVB project. Nevertheless, Charmaine is biding her time. Exasperated, TVB has to seek the help of Charmaine’s mentor good friend, Eric Tsang. The insider said, “When TVB organized a lavish banquet for Eric, they were hoping that he would be able to use that opportunity to convince Charmaine to go back to TVB. Charmaine was afraid to attend, so now TVB has to try again.”

Perhaps due to the negative backlash over Eric’s wild party at Disneyland, the hotel dinner ended on a sane note. Eric was barely drunk and obliged the reporters by getting everyone to gather around for a group shot.