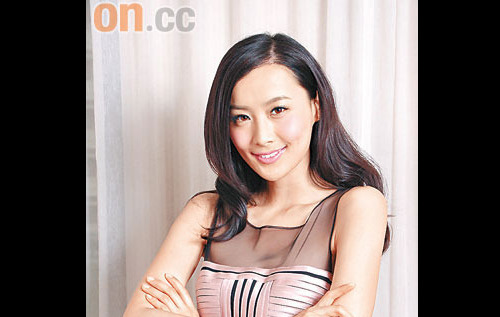 Due to Fala Chen’s role as Michael Tse Tin Wah’s girlfriend in the movie, “Turning Point” (Laughing Gor之變節), she was nominated in 2010’s Hong Kong Film Awards as Best Newcomer. This year, the Awards ceremony will be held on April 18th.

Earlier, Chow Yun Fat praised Fala’s performance in “Turning Point.” “I am extremely grateful for Chow Yun Fat’s praise. We are not friends and I do not know him personally. So I am very surprised he noticed my performance and mentioned my name. I have to thank Chow Yun Fat one thousand times! I need to have a greater measure of responsibility, as the world’s eyes are upon me now. I can not disappoint others. I must improve!”

Acting for the Long-Haul

Fala noted that the award results will not change her intentions to stay in the entertainment industry long-term. “I realize that you need to take things one step at a time in this industry. I will put my whole heart in each of my series/ films. I will learn from fellow veteran actors and add my own changes, to create a ‘Fala Chen’ style of acting.”

Fala has high ambitions in the entertainment industry. “My dreams are very big; they are without any boundaries. Many people want to surpass what others have already achieved. I want to be like Kara Hui Ying Hung and receive recognition, while establishing a career [that spanned decades]. I do not mind playing supporting roles. From the beginning of my career, I have rarely played leading roles. If I can receive the public’s acknowledgment, then I do not mind playing a supporting role one hundred times.”

Due to Fala’s nomination in 2010’s Hong Kong Film Awards, her love life became the media’s focus once again. Fala is currently dating, Sit Sai Hang. The Sit family owns Neway Karaoke, one of the most popular karaoke chains in Hong Kong. Fala did not have much to say about her relationship. “In the past, I never thought about hiding my dating life. I have no regrets in showing public affection with my boyfriend on the streets. However, since I am an actress, I do not have this freedom. If the paparazzi were to photograph us together and publish subsequent tabloid reports, this will affect our relationship. Thus, I am forced to handle our affairs in an understated manner.”

Fortunately, Fala has an understanding boyfriend. “It’s important that we have an understanding. In many areas of the world, when you have a good life and find someone you love, others would congratulate you. But in Hong Kong, once you earn some money, [people will imply that you are a ‘gold-digger.’] The paparazzi will [focus on the money aspect] and say you are dating a tycoon’s son, as if it was a ‘brand label.’ This will affect the relationship because no one wants to be labeled this way.”

After watching Charlene Choi and Ronald Cheng’s press conference, in which the pair explain their secret marriage and subsequent divorce, Fala was saddened. “I started crying after watching the news. Why does the paparrazzi have to mud-sling and claim that a third party triggered the divorce? The paparazzi has gone too far. We need to respect other people’s feelings. Charlene and Ronald were very brave to hold a press conference and come forward. They must have a reason for not revealing further details about their divorce.”

Whether Fala’s heart holds many secrets or not, we should not be in a hurry to find out. But we can see clues regarding her vision of marriage. Fala said, “I want to have children and will make plans for it.” As for the number of children, that will depend upon the physical condition of her body. “But I need to work, even after marriage. I will become crazy if I do not work.”

Jayne: Whether you like Fala Chen or not, it is undeniable that she has star appeal. I think she would do very well in movies, as she has as star quality which is rare among TVB actresses these days. Good luck to Fala! I’m sure she’ll be around for a very long time.