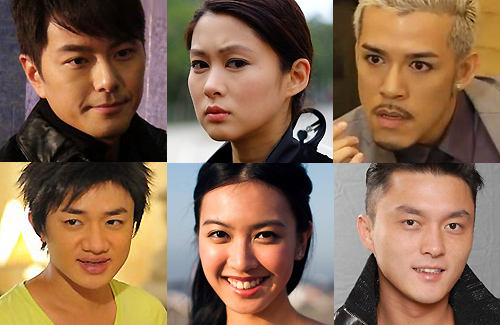 Note: “Ten Potential Breakout TVB Stars of 2013” is an original feature at JayneStars.com, where the hottest rising stars this year are profiled.

It takes a lot of talent, hard work, and luck in order to succeed as an actor. For many TVB artists, a successful acting career also requires skill and perseverance. Faring well in the entertainment industry is never an easy feat, but if given the right opportunity, one may as well end up being the next overnight sensation.

This year should not be different. The following ten TVB actors and actresses are JayneStars.com’s picks for potential rising stars to watch this year.

The viewer-voted Miss Hong Kong Pageant of 2012 ended in a disappointing moment forHong Kong netizens when their favorite, Tracy Chu, failed to win the crown. Perhaps Tracy’s popularity with the Hong Kong online community has made TVB realize that the company could potentially cultivate the 24-year-old into a future fadan. Tracy will be featured heavily in TVB drama, The Hippocratic Crush 2 <On call 36小時II>, in which she will be pairing up with the medical drama’s leading man, Lawrence Ng (吳啟華)! Whether Tracy will be the next big hit or the next big failure, it will all depend on this performance.

A graduate of TVB’s 13th artist training class, Matt was also a classmate of Tavia Yeung (楊怡) and Raymond Lam (林峯). Matt had the potential to become the next leading star after starring in the 2003 fantasy drama, The W Files, but one brush with the law got his career spiraling downhill. At one point, Matt even had to open up a small retail business in Hong Kong to earn a living. Matt’s struggles, however, may soon come to an end this year. The 32-year-old currently has two dramas lined up to air in 2013. His role in Slow Boat Home is also heavy.

The former Mr. Hong Kong winner never really got the attention of the audience until the 2011 sitcom, Til Love Do Us Lie <結·分@謊情式>, and definitely not until 2012’s critical success The Hippocratic Crush. Although the actor has yet to firmly establish himself as a scene-stealing supporting actor, he may have the chance to show his potential this year with the fantastic blockbuster line-ups A Change of Heart, Always and Ever, and The Hippocratic Crush 2.

Sammy is one of those very rare TVB artists who have first found success in film rather than in television. His sexy performance as Don in the film Lan Kwai Fong 2 has earned him a nomination for Best New Performer at the 2013 Hong Kong Film Awards. Even if Sammy fails to take home the award in the end, his critical acceptance will no doubt attract the attention of film producers and casting agents.

Arguably one of TVB’s fastest rising stars of today, Sire’s win as TVB’s Most Improved Female Artist award in 2011 was well-received by colleagues and critics, despite having less than two years of television acting experience behind at the time. Sire has never failed to deliver a poor performance, and although her acting is far from excellent, her improvements are quite obvious. In 2013, she will be starring in two major dramas with Wayne Lai –Bullet Brain, which will be airing next month, and No Reserve, which will likely be an Anniversary drama.

A former i-Cable television presenter, Priscilla’s close relationship with TVB executive, Sandy Yu (余詠珊), has made her move to TVB a smooth one. Although Priscilla was criticized for receiving special treatment from TVB due to her connection with Sandy, Priscilla performed amicably and genuinely as a leading actress in Reality Check, establishing herself as a credible rising star. Coming up next for Priscilla will be the comic inspired period drama, Karma Rider, in which she will take another stab as being a leading lady.

After gaining attention from portraying the young Charmaine Sheh (佘詩曼) in 2011’s When Heaven Burns, Angel secured a leading spot in the ongoing prime time show, Come Home Love, a popular sitcom to watch over dinner. Her successful performance in Come Home Love has gotten her a deal to star as the leading character in Patrick Kong’s (葉念琛) new romantic film, The First Time Wasn’t You. If the film becomes a box office hit, Angel’s career will see a rapid rise.

Eliza still has a long road to go until she cements herself as a leading star, but her scene-stealing debut performance in last year’s Divas in Distress definitely makes her constantly watched on radar. Her 180 degree change from being a bubbly and genuine news reporter in Divas in Distress to a quiet and reserved elite SDU officer in the upcoming Sniper Standoff is also highly anticipated by viewers. In addition to starring in more grand drama productions this year, Eliza will also be starring alongside Wong Cho Lam in the upcoming Patrick Kong film, Delete Lover <Delete愛人>, which will her entrance to the Hong Kong film industry.

There will be a lot of projects lining up for Wong Cho Lam this year. Besides album promotions, Cho Lam will be busy promoting his two comedy films, working on his Inbound Troubles sequels (which will reportedly include a movie sequel and a television drama spin-off), and filming for Food for the Slaves. Cho Lam also expressed his wishes to open up his own production studio sometime in the future. Factoring in at Cho Lam’s current rate of income and exposure, Cho Lam may find a new breakthrough in the following months.

In predicting potential breakout stars for 2013, Edwin Siu will without a doubt take the top spot. The 36-year-old became an instant hit when he first debuted as a singer in the entertainment industry in 2002; unfortunately, a mere misunderstanding and miscommunication between him and the media nearly ruined his career. He made a bold move when he chose to step into TVB’s entrance in 2008, but it was surely a move he did not regret.

Unlike the stars mentioned above, Edwin never had a truly significant breakthrough; his current success came from years of cultivation and establishing an affinity with the audience. Nonetheless, Edwin’s rise to leading siu sang appears to be inevitable. In fact, 2013 may be the year to see that happening with his involvement in upcoming grand productions, Brother’s Keeper and No Reserve. The success of these two highly anticipated dramas will pave the way for future leading-man roles for Edwin.