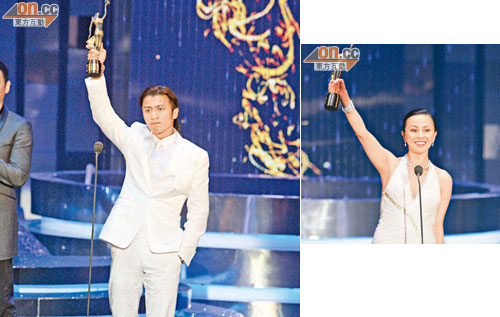 The 30th Annual Hong Kong Film Award (HKFA) was held on April 17, 2011. As Maggie Cheung predicted, Carina Lau, the favorite to receive the Best Actress award, won! After five previous nominations, the 46-year-old actress won on the sixth nomination, in the film Detective Dee and the Mystery of the Phantom Flame <狄仁傑之通天帝國>.

Dressed in a white Versace V neck dress, the wet weather outdoors did not dampen Carina’s spirits. Unfortunately, her husband Tony Leung could not rejoice with her due to scheduling conflicts. Nevertheless, in her thank you speech, she thanked the director and all those who worked on the set. In addition, she thanked her mother, saying that her Mom “wanted for her to win this award for a very long time.” In addition, she thanked her husband for his support and for giving her so much freedom. On the day of the award, his absence was made up by the numerous texts he sent her. Carina closed by noting that her one award does not compare to the success of Tony.

The Best Actor award went to 31-year-old Nicholas Tse for his performance in The Stool Pigeon <綫人>. He is the son of famed veteran actor, Patrick Tse and actress Deborah Lee. Nic entered the entertainment business at the tender age of 16. His talent and hard work has brought him success on many fronts.

This year, Nicholas was nominated for the first time and won, competing against experienced and previous award-winning actors such as Chow Yun-Fat, Tony Leung Ka Fai, Nick Cheung, and Jacky Cheung.  Nicholas’ wife, Cecilia Cheung, accompanied him to the awards and was emotional with tears when he won. In his thank you speech, Nicholas thanked Cecilia from the depths of his heart. Nicholas also thanked his father while expressing regret for his  earlier actions. When Nicholas won the Best New Actor award at the age o f 18, he acted disrespectfully toward his father. His father said to him that he has shot hundreds of movies and series to which Nicholas asked, “Have you received the golden award?” and placed the award on the table. Nicholas apologized for his past action and asked his father to forgive his young and arrogant self. Nicholas knows that his father is watching the televised awards and hopes that his father can forgive his thoughtless remark made twelve years ago. In fact, Nicholas praised his father as the best actor because his father was able to raise a real menace (when  Nicholas was young) but still maintained a happy disposition. 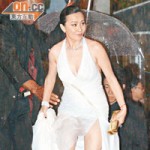 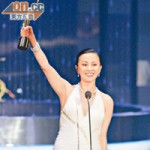 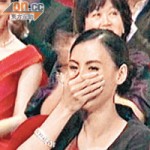 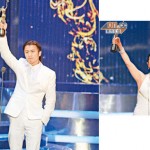 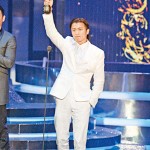