The year’s strongest tropical cyclone, Typhoon Mangkhut, made landfall last week, terrorizing through the Philippines and Southern China. As typhoon veterans, many Hong Kong citizens have already stocked up on masking tape to tape large window panes of their homes, as a strategy to reduce injury.

Masking tape has become an iconic symbol for typhoon precaution, and being trapped in your homes for hours at a time with no where else to go, people got creative.

Lynn Hung (熊黛林) taught netizens the normal, standard way of taping one’s window panels, which is to tape the windows to form the character “rice’” (米). Lynn’s sister-in-law Kenix Kwok (郭可盈) also showed off her taping skills, and warned netizens to brace for the oncoming storm.

Raymond Lam (林峯), on the other hand, didn’t follow the rules as carefully as Lynn and Kenix. He wrote on the night of September 15th: “My aunt told me that she has already taken care of the windows. I came back home and saw this. Why does it seem weird?” 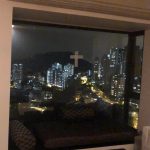 Some netizens shared taping pictures of their own. One netizen taped a spider web on the glass, while another taped the words, “Mangkhut just go home.” 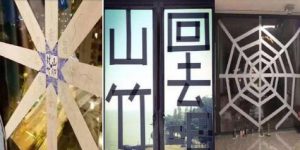