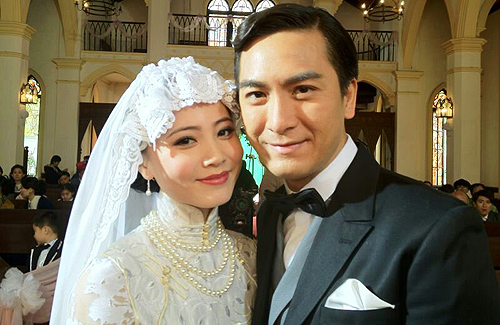 This year has been splendid for Kenneth Ma (馬國明). With four dramas, several popular dramas, one Astro Best Actor win, and a TVB My Favorite Character win, Kenneth is 2012’s new breakout star. Kenneth’s popularity surged and his fan base increased exponentially within a matter of days, and he also succeeded Kevin Cheng (鄭嘉穎) to  be TVB’s number-one diamond bachelor after announcing his breakup with Nancy Wu (胡定欣) earlier this year.

Although Kenneth may have lost the Best Actor honor to Wayne Lai (黎耀祥) at the TVB Anniversary Awards, it seems that Kenneth may have gained something else, or someone else, that night. Tabloid magazine, East Week, reported that Kenneth’s days of being single are now gone, because the actor is now dating his Silver Spoon, Sterling Shackles <名媛望族> costar,Rebecca Zhu (朱晨麗).

Last Friday, the cast of Silver Spoon, Sterling Shackles held a dinner banquet to watch the drama’s finale episode together. Kenneth was Rebecca’s driver the entire night, taking her to and back from the banquet.

Kenneth had once said publicly that he found Rebecca extremely cute, and instead of calling her by her name like the rest of her friends, Kenneth insisted on calling Rebecca “Morning Zhu,” meaning “Morning Pig.” Rebecca also gave Kenneth her first onscreen kiss.

Insiders revealed that Kenneth and Rebecca were extremely close on the set of Silver Spoon, Sterling Shackles. Portraying husband and wife in the said drama, Kenneth and Rebecca shared many scenes together, and as a result, Kenneth never left Rebecca’s side. The tabloid magazine claimed that because of their close working relationship, the onscreen couple quickly developed feelings for each other.

Confronted by the press regarding their dating rumors, Kenneth and Rebecca were quick to deny the romance. He explained that he was only Rebecca’s chauffeur. “That night, we finished watching the finale of Silver Spoon, Sterling Shackles and went out for supper. Inside the car was also Adrian Chau (周志文), which the tabloid publication cropped out. Rebecca is a great girl, but right now, I wish to focus on work first.”

Rebecca also complimented Kenneth for being a good man, but emphasized that they were only colleagues for now.