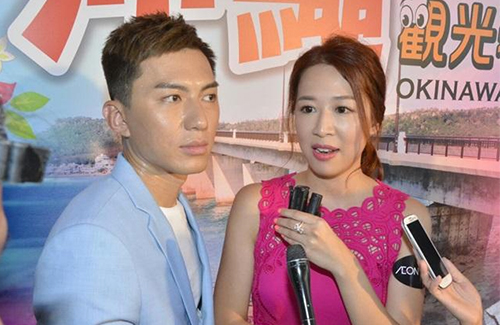 According to the latest gossip mill, A Fist Within Four Walls <城寨英雄> star Benjamin Yuen (袁偉豪) has proposed to his girlfriend Jennifer Shum (岑杏賢) during their trip to Vancouver recently. The couple have been dating for nearly three years.

But according to Ben and Jennifer, those reports aren’t true at all.

At an event they attended last Wednesday, Jennifer said they have never thought about marriage—at least not yet.

“We’re both very busy,” said Jennifer. “But we’ll leave it down to fate. It doesn’t matter when we get married, but [Ben’s] career comes first. I want [marriage] to be a natural process—it’ll happen when the time is right.”

Many of Ben and Jennifer’s friends in the industry have stepped out to deny the marriage rumors. Tracy Chu (朱千雪) was one of them.

In regards to Tracy’s decision to postpone her TVB career to study law, Jennifer said she will support Tracy no matter what decision she makes.

As for their thoughts on attending the event as a couple, Ben said simply, “It’s an interesting feeling.”

Thanks to the popularity of A Fist Within Four Walls, Ben’s popularity has also increased. Has Ben been saving money for marriage? “Let’s take this one step at a time,” he said.

Asking if Jennifer is in charge of managing Ben’s money, Jennifer said, “I was never good with numbers. I don’t know how to manage money.” They stressed that they are economically independent, but Ben said he will give his paycheck from this event to his girlfriend.