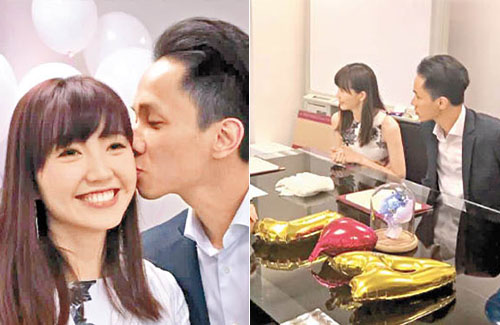 On October 10, 25-year-old Jinny Ng (吳若希) officially tied the knot with her longtime boyfriend Alex Ho (何兆鴻) from Macau. The couple have a baby daughter Giselle, who was born last April.

Jinny’s relationship with Alex and the subsequent birth of their child was met with criticism and harsh speculation. A few months after going into her sudden hiatus, the young TVB singer confirmed her pregnancy. The fact that she was not married to Alex at the time brought in negative reactions among the netizen public.

But the couple reached their “ten out of ten” ending on October 10 when Jinny and Alex registered their marriage that Tuesday. Jinny’s music producer and The Voice Entertainment CEO Herman Ho (何哲圖) acted as the couple’s witness. Jinny and Herman announced the good news through TVB’s big big channel platform, bringing in the support of fans.

Jinny did not wear a wedding dress. She wore a floral but simple tank and a black skirt. The couple signed their papers within an office meeting room at The Voice Entertainment. Jinny said she chose that location because most important contracts would be signed in that room. “And this is a very important contract in my life,” said Jinny.

The “ceremony” was very laid-back and quick. Jinny did not cry when she recited her vows. “We were having so much fun. It was a great time,” she said. “I wasn’t detailed enough in my vows. I should have specified who should be in charge of the money after marriage!”

On choosing Herman Ho as their witness, Jinny said, “I don’t have many family in Hong Kong. [Herman Ho] is like a father to me. He brought me into this road, and when I get lose, he drags me back to the right direction. He’s my biggest supporter, so this company feels like home to me.”

Jinny and Alex aren’t planning on holding an official wedding ceremony or a high-profile wedding banquet, but the couple plan to gather around a few friends and family for a meal once everyone’s schedules are cleared. “It’ll most likely happen next year,” said Jinny. “We don’t have anything planned yet thought.”

Did Alex official propose to her? Jinny laughed, “He hasn’t! May twenty years later. Convince him now!”

That night, Jinny went online to update her fans with the big announcement. “Please call me Mrs. Ho… we hope we can receive everyone’s blessings.”