Who knew the actor has bodily insecurities too.

Entering the industry for ten years, Joey Law (羅天宇) admits that is unhappy about focus on his relationship rumors. “In the past, I would get sleepless when there is negative news, and worry that it would affect my career. Now I have slowly gotten used to it by buffing up my EQ and being my best self. However lately the actresses who has rumors with me are all ‘goddesses’, I fear getting beaten up when I go on the streets!”

The 31-year-old actor, who has dated Christine Kuo (苟芸慧) and Roxanne Tong (湯洛雯). Jokes aside, the actor denies that he is fickle in love. “I am serious about every relationship, and had dated for four years in my previous (relationship).”

Fortunately, Joey’s mother is usually very calm when Joey’s romantic rumors are reported in the press. “She always uses a positive outlook to teach us how to deal with the news. Even if there were rumors, she would comment that it’s good that the reports say I have so many girlfriends.” He added, “Her thinking is very simple. Recently when my car got damaged, she asked if I was alright, and told me not to be unhappy, as problems that can be solved with money aren’t problems anymore. While I would complain that the repairs cost a lot, she is glad that at least I am okay. But lately, she started getting concerned about the negative news, worrying about the bad press affecting my work. Though she tries to think positive, she is concerned about our health and happiness above other matters.”

Despite the many relationship rumors, Joey is still single today – something he attributes to his personality traits. “I am boring and have never been a very decisive person as well. My partners often complain that I should toughen up like how guys should be.” Used to giving in his girlfriends, Joey has been told that he should raise his own opinions rather than saying, “Anything is good, as you wish!” Acknowledging this, Joey shares that he only wanted to be the best boyfriend and let his girlfriend do as she wishes. Learning something from every relationship, Joey makes an effort to change, but sometimes he would fall back onto his old habits.

Insecure About His Sunken Chest

Due to a congenital condition known as pectus excavatum, where the breastbone grows in an inward direction, Joey had to deal with a sunken-in chest since young. Suffering from arrhythmia, he also has a smaller lung capacity than the average person. This means he has to sit down and take a rest whenever his heartbeat becomes irregular. “Even with a shirt on you can see my heart palpitating. Luckily, the situation has become less serious now. But the biggest problem is the external appearance; I got teased by classmates when I was young. The unhappy experience was so traumatic that I would feel anxious and even suffer shortness of breath whenever I remove my shirt,” shares Joey. 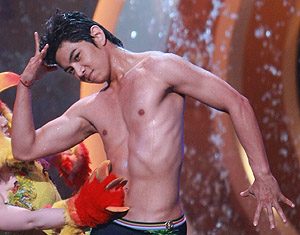 With adulthood, the phobia has lessened. In recent years Joey also started working out, seeking the help of instructors to correct the concave appearance of his chest. “I focus on training my right chest to make both sides more balanced, but developing muscles (at the bony sternum area) is hard so more work needs to be done.”

In OMG Your Honour <是咁的,法官大人>, Joey has a scene which requires him to run shirtless on the street. Was he worried? Recalling when he had participated in Mr. Hong Kong in 2008, he mustered courage to go on-stage and use his hands to pose more to distract attention from the appearance of his chest. “The audience didn’t notice much,” he said. “But during filming, if the camera focuses for too long, everyone will (notice) and ask me what happened.”