Now in his thirties, Joey Law realizes he can do more for his career.

A famous celebrity once said, “Try googling your name and the first few suggested search terms will reveal what kind of a person you are.” Googling Joey Law’s (羅天宇) name, the first suggested term is “girlfriend” followed by “height” and “background”. Results also return Jeannie Chan (陳瀅), Coffee Lam‘s (林芊妤), Roxanne Tong (湯洛雯), Christine Kuo (苟芸慧), and occasionally “Ma Zi Ren” (Joey’s character in the long-running sitcom Come Home Love <愛·回家>, but few include the currently airing drama Life on the Life <跳躍生命線>”. With a decade in the industry, Joey’s portfolio of dramatic works is less than expected, and his only memorable role to-date would only be Come Home Love.

In the last 10 years, even Joey himself felt that perhaps he lacked enough career ambition in the past. “I have to admit it. After I turned 30, and received this role. Suddenly I thought, I really have to achieve something, I have to wake up. So I gave myself stress during the filming, so much as that I grew white hair and had insomnia. After filming, I felt I had achieved a breakthrough and the producer said, ‘You did well in a few scenes,’ and the editor told me, ‘You portrayed the role just as I had imagined,’ I felt a sense of accomplishment when I gained recognition then.”

Strict Parenting Led to His Personality

“My mom likes to have me kiss her. I do so every day before I leave the house,” said the actor. Joey, his brother and their mom have been extremely close since young. When he had to go on a diet for his role in Life on the Life recently, his mom took time out from work to prepare handmade lunches for him. Though Joey shares a close relationship with his mom, he feels that he is a “guinea pig”, as his mom would experiment with her parenting style on him first, since he is the older son.

He recounts how protective and strict his mother was – as a young student, Joey had to return home straight after classes. He recalled once when he went to a classmate’s home for two to three hours instead of heading home – and his mom started calling up his friends home numbers one-by-one. When he wanted to join the basketball team in secondary school, Joey’s mom said “no” as the players on the team had more complicated backgrounds, even though Joey enjoyed the sport. His mom even forbade him from going out on the streets, which caused him to enjoy being alone as he grew up and to develop an introverted personality. However, realizing how introverted Joey turned out, she adopted the opposite approach with his younger brother, encouraging the latter to play basketball in secondary school, and even bringing him to a nightclub in Taiwan and allowing him to drink alcohol.

In a parallel with reality, Joey’s character in Life On the Line also grew up under vastly different circumstances from his brother, played by Matthew Ho (何廣沛). 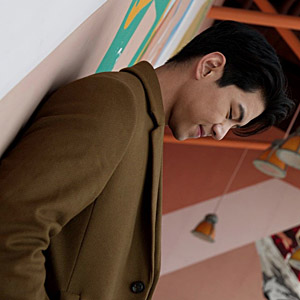 Reflecting on his mother’s parenting style, Joey admitted that it might be the reason why he lacked the ability to decide things for himself, but things got better as he became an adult. While he listens to his mom and does what she says, Joey denies the “Mommy’s Boy” label. Although he respects his mom a lot, he would not consult his mom on every matter big and small.

Sharing more about his mother’s role in his life, Joey admits that his mom has a hand in much of his life’s narrative: from him going overseas for studies to encouraging him to take part in Mr. Hong Kong pageant in 2008.

When asked if he has any regrets about being a guinea pig for his mom all these years, the actor dismisses it but said, “There’s no other way. My brother grew up very tall, not sure if it has anything to do with basketball?”

Looking to the Future

Though one remembers the saying “A man should be independent at 30”, for Joey, he has already missed two great opportunities to climb higher in his career – the first time after he emerged as winner of the youth division of Mr Hong Kong contest when he was 20, and the second time when he was given the chance to play “Ma Zi Ren” in Come Home Love.

When asked if he feels it is too late for him to start striving harder now only at 30, Joey turned pensive and said, “I think the process was unavoidable. It wasn’t as if didn’t work hard, but my passion was not strong enough. More importantly, I’m clearer about (what I want) now,” Indeed, compared to Wayne Lai (黎耀祥) who took 22 years of hard work before clinching Best Supporting Male Character with his role in The Gentle Crackdown <秀才愛上兵> when he was already 44 years old (he entered the industry in 1986), time is still on Joey’s side, as long as he learns to grab hold of his chances now.