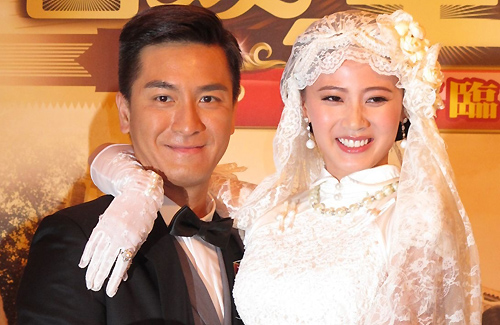 Rebecca portrays Kwai Siu Yau in Silver Spoon, Sterling Shackles, a woman who is torn between Kenneth and Ron Ng (吳卓羲). It is a role many women would die for, and Rebecca has nothing but praises for both actors. She even joked that a combination of the two men would result in her perfect man. Rebecca said, “The two are tall and handsome, so every girl would fall for them!” However when the reporter prompted her to pick her favorite, Rebecca, after careful consideration, selected Kenneth, perhaps because Kenneth was sitting next to her during the interview. ” He may be upset at me if I don’t pick him!” Rebecca joked.

Before filming Silver Spoon, Sterling Shackles <名媛望族>, Kenneth actually did not know who Rebecca was. He only knew he was going to costar with a Miss Hong Kong winner who had replaced Fala Chen (陳法拉), but he did not know what she looked like. Rebecca said Kenneth had even mistaken her as someone else. Kenneth laughed and asked if he had called her Fala by mistake.

After the filming for Silver Spoon, Sterling Shackles began, the two became close enough that the humorous Kenneth even coined her new nickname, “Morning Zhu”. Kenneth said a lot of popular artists have nicknames, so Rebecca needed one to join the crowd. Rebecca said the nickname sounded awkward, but just sighed and accepted as it is.

During the interview, the reporter noticed that Kenneth and Rebecca were occasionally flirting with each other. Since they portray lovers in the series, maybe their characters’ romance crossed over into reality. Kenneth said, “I did feel attracted during filming. Siu Yau easily attracts others; every man would be tempted to protect her.”

50 comments to Kenneth Ma Admits Being Attracted to Rebecca Zhu