TVB artistes Kenneth Ma (馬國明), Hugo Ng (吴岱融), and Kiki Sheung (商天娥) were seen filming for new drama BB on Top <BB大晒>, which is a spin off from the sleeper hit Who Wants A Baby? <BB來了>.

In the latest baby-themed drama, Kenneth and Hugo play a father and son with a broken relationship. Hugo has ruined many big milestones in Kenneth’s life and leaves his wife Kiki extremely upset. Filming an emotionally-charged scene in front of the hospital, Kenneth pushed Hugo to the ground and swore at him. Hugo slapped himself in the face to show remorse, but Kenneth did not accept it and threw more punches at him.

Hugo joked, “Kenneth is so big and tall, so his punches do pack some power!” 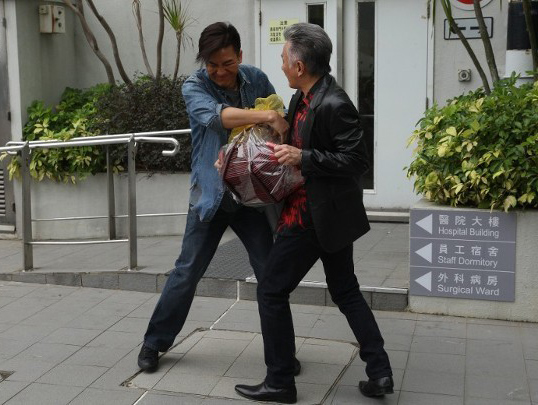 This is the first time that the two actors are collaborating, but they often play soccer in real life. When asked if there is conflict when they play soccer, Hugo denied, “He plays as a forward and is in charge of offense, whereas I play in a defensive role. He is very serious when he plays. We’re both polite people and have good sportsmanship. Everyone knows that Kenneth is a good guy!”

Kiki joked that on her first day of work, she had to film a “bed scene” with Kenneth. “The scene talks about us lying in bed together and hugging each other. In the end, we decided to hold hands instead.” The media asked if her heart skipped a beat and Kenneth interjected, “My heart skipped a bit! This happens whenever I film bed scenes!” Kiki added, “I’m a seasoned veteran! Back in the days, many people tried to flirt with me in the makeup room. It’s not so easy to make my heart skip anymore!”