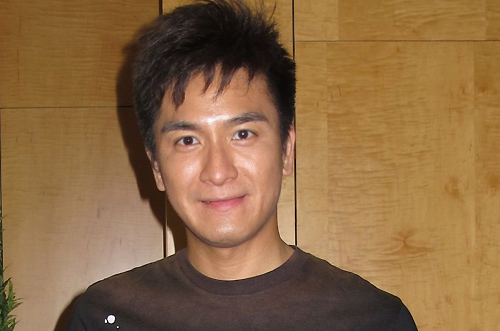 During a Christina event function held in Shui Wai on December 23, Kenneth quickly debunked his rumors with Rebecca, and said, “It is definitely a misunderstanding as I was never ‘caught in the act.’ I was also taking Adrian Chau (周志文) home that night, and he was in the car with us.”

While filming for Silver Spoon, Sterling Shackles, Rebecca revealed that she had broken up with her Ukranian boyfriend, Kostyantyn Keshyshev, due to her work commitments in Hong Kong. Rumors say that because of the split, Rebecca was able to warm up to Kenneth faster than usual.

Kenneth appeared confused about Rebecca’s break-up and said, “Really? I didn’t know! And it really was none of my or others’ business to ask her if she had a boyfriend or not. But I did notice that Rebecca was rather quiet when filming first began. Ron Ng (吳卓羲) and I tried to get her to join in our conversations. She warmed up to us later on.”

As this year’s first-time Best Actor winner, Kenneth happily exclaimed that he is currently accepting more job offers, reasoning that he has no time to find a new girlfriend for himself. “My workload increased after winning ‘Best Actor’ in Malaysia. After winning [My Favorite Male Character] in Hong Kong, the load increased even more. Right now, earning money is my top priority. I want to save enough money to purchase a flat after the property values decrease.”

Kenneth revealed that he had lost up to a six-figure sum when he invested in a stock in the past, and thought it was safer to purchase the property in its original value to avoid price inflation.