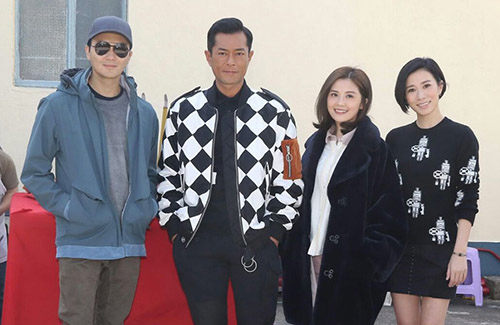 Always By Your Side is Louis and Charmaine’s second film project as a couple, the last one being 2015’s Triumph in the Skies: The Movie <衝上雲霄>. Louis joked that his marriage with Charmaine is itself more horrible than Chilam’s role.

The film is Charmaine’s first horror project. Afraid of horror films, the actress said she wouldn’t be able to watch even three minutes of one. Louis joked, “Three minutes? That’s just the opening credits!”

So did Charmaine think about turning down the filming offer? “No,” she said. “Filming it is not scary, because I’ve read the script and I know what happens. The creepiest part is when you first receive the script and read it at home.”

To play a cold-blooded killer, Chilam did a lot of “research” for his look. The actor joked, “No make-up for me. I needed to have dark circles and red eyes for this role, so I went out every night and partied. My wife wouldn’t believe me! I just look too radiant all the time.”

Charlene, who plays a nurse in the film, was photographed leaving halfway through Big Bang’s concert when the Korean hip hop group played in Hong Kong this past weekend. Charlene talked about her situation on Instagram, and said it was her worst concert experience.

“My stomach wasn’t feeling well and I had diarrhea all day. It was cold. In the end I couldn’t handle it. People beside me said I looked really pale, like I was about to faint. It was so hard to get a ride, too!”

She then left the concert with her friend and stylist, Mayao Ma (馬天佑). Because she didn’t have money or her Octopus card, she couldn’t catch a minibus home. Fortunately, a stranger lent her a helping hand.

“Hong Kong people are great, and so kind. A stranger lent us, no, gave us $11 HKD to take the minibus.”