Michael Tse Not Capable To Hold The Fort On His Own; TVB Supports Wayne Lai & Moses Chan To Be TV King 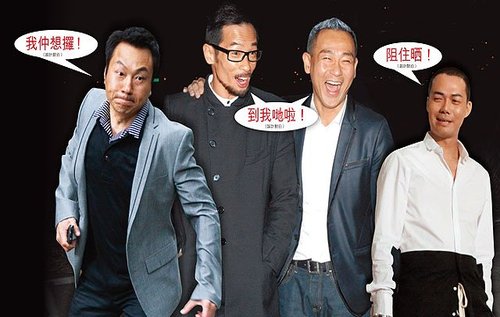 It is now less than three months before the annual TVB Anniversary Awards Ceremony《萬千星輝頒獎典禮》however the contenders who had temporarily been highly looked upon to be the new TV King and Queen, were indeed few and far between.

In order not to let the Anniversary Awards lose it’s shine, TVB immediately deployed some strategies including launching four blockbuster dramas helmed by their first line Siu Sangs actors and Fadans actresses in the remaining months.

By releasing these four grand production dramas, TVB hoped that it would drum up the much-needed publicity for the striving of the TV King and Queen title and anticipation just in time for the TVB Anniversary Awards.

Since TVB was renowned for treading on stable grounds, it was known that in order to maintain the quality of their TV King award recipients, there was a huge chance that they would stick to their conventional past winners such as Wayne Lai and Moses Chan, thus leaving hot contender Laughing-Gor Michael Tse out in the cold and making his happiness all boiled down to nothing. In the month of September, only the undercover-police-triad drama, Lives of Omission《潛行狙擊》,  managed to be the pride of TVB by stirring up heated discussions amongst avid television fans and headlining the various newspaper and magazines out there. However, even though the other recent TVB dramas like Ghetto Justice《怒火街頭》and Yes Sir, Sorry Sir《點解阿 Sir係阿 Sir》had also received glowing reviews from the audiences, all of them still failed to make history for TVB and break the previous records left behind by their predecessors.

As such, the current contention for the TV King and Queen awards were fought between the likes of Michael Tse who has yet to secure his seat as a first line actor, Kevin Cheng who was a former TV King, Fala Chen and Linda Chung. A backstage crew of TVB revealed, “Up till this moment, only Michael Tse and Kevin Cheng are the more outstanding ones. However, both of them do not have enough potential (唔夠料) to be this year’s TV King. As such, one of the senior management staff has voiced out that if either of them wins the TV King award, there wouldn’t be enough commotion.”

Not wanting to let their anniversary awards night look too dismal, TVB’s inner staff hurriedly strategized and devised a plan to release all four blockbuster drama series that already have their staple first line actors and actresses leading in them, in a bid to boost out more hot candidates running for the TV King and Queen awards.

Pushing forward for the last sprint First up to fight the frontline would be Liza Wang’s and the three fortune buddies’ “Detective Liza and Gods”. It would be premiering on 3 October 2011 and broadcasting at 8:30pm.

As for Wayne Lai who has an opportunity to win the TV King award for the third consecutive time, his “Forensic Heroes 3” drama  which also co-stars Maggie Cheung Ho-Yee would be succeeding the 9pm time slot after “King of Chok” Raymond Lam‘s (林峯) Men With No Shadows《不速之約》has ended its run. Directly after “Detective Liza and God”, the 8.30pm time slot would be followed up by “The Queen of All” which starred Jessica Hsuan and Myolie Wu. “Queen” had also been referred to as the hybrid version of War and Beauty《金枝慾孽》and Beyond the Realm of Conscience《宮心計》. “Queen” will premiere on 31 October 2011. The drama responsible for delivering the final hype to the Anniversary Awards was none other than the cannibalism thriller, When Heaven Burns, which has a stellar cast of Moses Chan, Bowie Lam, Charmaine Sheh, Maggie Shiu (邵美琪) and Kenny Wong. It would be premiering on 21 November 2011 and taking up the 9pm time slot of “Forensic Heroes 3”.

The banquet of endless copying

Whereas the four soon-to-be-broadcasted Anniversary dramas were all seriously lacking in originality. While “Forensic Heroes” and “When Heaven Burns” continued to imitate their western counterparts, “The Queen of All” and “Detective Liza and Gods” lifted ideas from the past TVB classic dramas. “Forensic Heroes 3” portrays about how the police cracks cases from a scientific point of view. By capitalizing on their expertise, forensic experts assist the police in deriving the crux of the cases from analyzing crucial clues left behind in the scene like fingerprints, shoe prints, blood spatters, hair fragments and etc. While investigating the crimes, the male and female characters also get romantically involved with each other, totally resembling the plot out of “CSI: Crime Scene Investigations”.

“When Heaven Burns” a replication of Alive: The Story of the Andes Survivors “When Heaven Burns” primarily focuses on the controversial topic of cannibalism, clearly inspired from the 1993 American film adaption of the 1974 book, “Alive”, which documented the chronicles of the Uruguayan Air Force Flight 571.

“When Heaven Burns” depicts of the immoral sin the four main leads committed while on a tour overseas. Due to being trapped up in the mountain in freezing conditions, they were being forced to practice cannibalism and feed on human remains to survive the ordeal. However, the conflicting matter was eventually exposed when the body of the human remains surfaced after bits of the snow capped mountain had melted away due to global warming. The past ancient periodic dramas,”War and Beauty” and “Beyond the Realm of Conscience”, both paint a vivid picture of the intense rivalry between the concubines in the imperial harem.

Since the previous success formula, where every female main lead is evil to the bone in both dramas, proved to be a huge hit with the audiences, it had been further replicated in “The Queens of All”.

In “Queens”, Myolie Wu would be acting as the evil empress who would resort to cunning schemes and trickery to harm Jessica Hsuan, thus leading to a open strife and discreet infighting between the two women, undoubtedly sounding like a carbon copy of “War and Beauty” and “Beyond the Realm of Conscience”!

“Detective Liza and Gods” a reproduction of Old Time Buddies 2: To Catch A Thief

This drama would be set in the 60s and described about how Liza Wang, who ran a detective agency, employed the three fortune buddies (Wong Cho Lam, Johnson Lee and Louis Yuen) and together they formed the formidable snooping team which cracked complex cases in their various state of disguises.

The background and gimmick of this drama was undeniably similar to the 1998 comedy-drama, “Old Time Buddies 2: To Catch A Thief”《難兄難弟之神探李奇》, which had starred Gallen Lo (羅嘉良) and Maggie Cheung Ho-Yee, especially since both dramas featured the important element of disguise.

Fala Chen could end up empty-handed TVB’s change of tactic to welcome the TVB Anniversary Awards Ceremony held in December, could meant that current TV King Wayne Lai might be able to retain his title and Moses Chan, who has been appearing in the entertainment news of late due to his passionate love life with Aimee Chan, could stand a chance to win the TV King award due to his recent increased publicity. This also meant that Michael Tse and Kevin Cheng may tragically suffer a reversal of fate and turn from the current hot contenders to being knocked out in the cold.

As for the TV Queen position, some sources pointed out that with Stephen Chan‘s (陳志雲) return to power, he would grant his approval to raise his “Stephen Chan camp” member, Fala Chen, up to the throne. However, it was known that during Stephen Chan’s entanglement in the corruption lawsuit, Fala had temporarily abandoned his ship and discreetly jumped over to lean on Virginia Lok (樂易玲) thus putting her initial chances of winning the TV Queen award at peril. A crew from behind-the-scenes disclosed, “Fala Chen is an intelligent and prudent woman. Very unlike her fellow peer, Bernice Liu (廖碧兒), who had blatantly drew a clear line with Stephen Chan back then. Actually, when Stephen Chan was in trouble and could’t even defend for himself, Fala had already switched over to the “Virginia Lok camp” and every time when Virginia gathered her camp members for a dinner, Fala would always give Virginia full “face” and attend those gatherings. Sometimes, even together with her boyfriend, Sit Sai Hang, in tow!” Through Fala Chen’s dependence on Virginia Lok when he was embroiled in the bribery and fraud charges, Stephen Chan already has a rouge gauge in his heart about the extent of Fala’s “loyalty” to his camp.

It could thus be said that Fala’s chances of clinching the TV Queen award this year, based on her role as Madam Jo, could be strongly diminished anytime now!

As for Linda Chung, her kneeling and shouting scene at Moses Chan’s Law-Sir in TVB drama,”Yes Sir, Sorry Sir”《點解阿 Sir係阿 Sir》, may have touched the hearts of several audiences but a source cited that the senior management staff felt that Linda wasn’t an ideal candidate as she didn’t command enough onscreen presence and wasn’t ready for the TV Queen award as yet (未夠火候) hence greatly reducing her chances of being TV Queen this year.

In contrast, Myolie Wu, who had always been criticized for her “gwing” facial expressions and average acting skills, has recently been highly applauded for her convincing turn as a vicious empress in the upcoming epic drama, “The Queen of All”,  which was said to be a huge departure from her previous mediocre acting performances. It was thus believed that Myolie could have an edge over her fellow contenders and might even emerge to be the dark horse on the awards night! The backstage crew insider continued, “The director and those backstage crew that participated in the production of “The Queen of All” were talking in unison about how Myolie Wu had kept away all her “gwing” expressions such that her acting skills seemed like it didn’t belong to her but that of another person’s. However Myolie has been known to have little affinity with the audiences thus her chances of winning would have to depend on the overall reception from the audiences when the series is out and the tastes of the senior management staff.”

Predicting the top five choices of TV King and Queen

Every year for the Anniversary Awards, TVB’s first line Siu Sangs actors and Fadans actresses would strive to be more outstanding than the other, in a bid to win the  inaugural TV King and Queen awards.

This year, the current hot contenders for TV King were Kevin Cheng for his role as Law Ba and Michael Tse for his role as Laughing Sir. As for TV Queen, Fala Chen for and Linda Chung were both highly looked upon for their roles as Madam Jo and Miss Koo respectively. However, the contention will only get more heated and  intense with the addition of more candidates after the upcoming launch of the four heavyweight TVB dramas.

It was predicted that the following ten actors and actresses have the best chance to strive for the TV King and Queen award for the Anniversary Awards this coming December: “Best Actor” (in no random order)

Kevin Cheng for his role as Law Ba in “Ghetto Justice” “Best Actress” (in no random order)

Linda Chung for her role as Miss Koo in “Yes Sir, Sorry Sir”

170 comments to Michael Tse Not Capable To Hold The Fort On His Own; TVB Supports Wayne Lai & Moses Chan To Be TV King