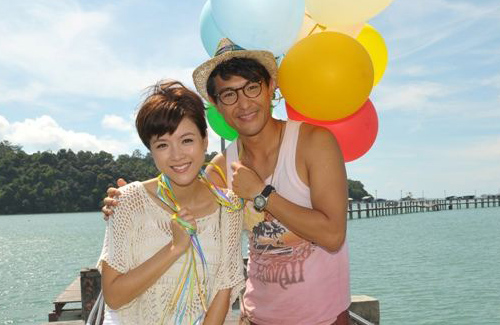 Airing during the holiday break, the ratings for the first three weeks of broadcast for Outbound Love <單戀雙城> were less than stellar. In Hong Kong, the TVB series drew in an average television viewership ratings as low as 24 points and had peak ratings of only 27 points. Fortunately, ratings showed an improvement on its fourth week of broadcast, which fell on the week of February 3. According to official sources, the fourth week of Outbound Love achieved an average of 29 points, reaching approximately 1.8 million viewers. It peaked at 31 points, with almost 2 million viewers tuning in.

The cast of Outbound Love attended a promotional event for the series. Ruco Chan (陳展鵬) expressed his relief on the show’s improvement, confessing that he had been worried about the drama’s ratings. He also added that his role in the drama, the sweet-talking tour guide Luk Kung Chi, is quite different from his earlier performances and considers the role to be one of his representative works.

Ruco’s costar, Tony Hung (洪永城), is also happy about Outbound Love’s viewership accomplishments and credited its success to the drama’s script, cast, and production crew. He hopes that the ratings for Outbound Love, including its finale on February 16, will be higher.

Tony, who debuted as an actor with Outbound Love, said he asked for his friends’ constructive criticism on his first performance. “I’ve earned the nickname ‘Ki of Expressions’. They said I am too over the top. I will work hard and train on them,” said Tony. Well-known for his hosting gigs and travelogue programs, Tony revealed that he will be focusing on his acting career in the next few years. “I’ll probably film one travel show a year. [TVB] has arranged me to film more television dramas.”

Outbound Love was Aimee Chan’s (陳茵媺) last television drama before she gave birth to her son, Aiden Joshua. Aimee was pregnant during the filming of Outbound Love last year, and it was amusing to watch the series with her son. Aimee said she does not feel that it is too late for Outbound Love to attain higher ratings. Comparing it to red wine, she explained, “Sometimes things need to be savored before the climax can come.”

Last week, during a Lunar New Year gathering with close friends in the industry, Cindy Lee (李思雅) accidentally uploaded a photo of a security camera shot of Aiden sleeping in his crib, revealing him to the public. The photo was later deleted. Aimee explained, “The security camera was for my parents to watch out for emergencies. I am not worried about [the photo leak].”

The 32-year-old also revealed that Aiden does not have a Chinese name yet. “We’re still thinking. It needs to be treated seriously because the name is going to be with him for the rest of his life. I hope we’ll be able to announce it as soon as possible.”