Raymond Lam Is Tired of Playing the Good Guy 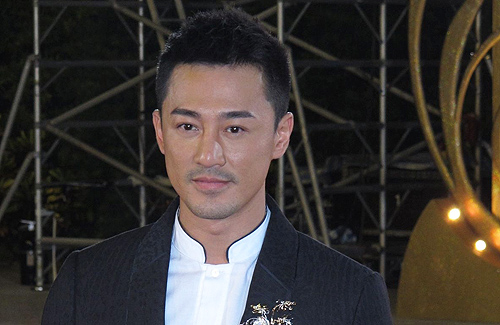 The TVB Anniversary Awards are just two weeks away, and Raymond Lam (林峯) is all prepared for the challenges to come. Although Raymond had just lost to Kenneth Ma (馬國明) for the Best Actor award in Malaysia last night, Raymond’s confidence is here to stay. The 32-year-old singer-actor exclaimed that he has no fear in going against contenders such as Damian Lau (劉松仁) and Wayne Lai (黎耀祥) for the TVB Best Actor award.
“I am very proud of my character in Highs and Lows <雷霆掃毒>,” cried Raymond, who is nominated for Best Actor nomination for his role as Happy Sir in Highs and Lows, “Because he is as ‘hea’ (lazy) as I am! Haha! I am very casual when I’m at home. I don’t like doing housework.” Is Raymond saving all the housework for his wife to do? Raymond laughed, “There’s no need to. When I have free time with nothing to do, I will clean up.”
Full of Confidence
This year, TVB Anniversary Award’s Best Drama, Best Actor, and Best Actress winners will be determined entirely by audience voting. As a result, actors with the most fans have an advantage for the award. While other Best Actors hopefuls are busy holding their own campaigns to draw in more votes, Raymond used this time to leave the spotlight to film Michelle Ye’s (葉璇) Legend of the Purple Hairpin <紫钗奇缘> in mainland China. Raymond, who undoubtedly has one of the largest fan bases in Hong Kong, is unafraid of losing out in votes against the other popular candidates.
Raymond said, “After becoming a singer, my fan base increased, and it has helped me a lot. I think I am truly very lucky. Throughout my performance career, I’ve won many awards and titles… I do want to win [Best Actor]. For the past several years, the media has always placed the spotlight on me. Every time I attend an award ceremony, no matter if I win anything or not, there will always be different opinions out there. When I win it, they will talk. When I don’t win, they will talk. If that’s the case, why not win!”
Raymond won his first TVB acting award in 2003, the Most Improved Male Artist, for his performance in Survivor’s Law <律政新人王>. In 2008, Raymond won the My Favorite Male Character award for his role in Moonlight Resonance <溏心風暴之家好月圓>, and the same award again in 2011 for his role in The Mysteries of Love <談情說案>.
Raymond’s role as Happy Sir in Highs and Lows made him a popular candidate to win this year’s Best Actor and My Favorite Male Character awards. Asked if he has confidence to win Best Actor, Raymond thought for a moment, but later nodded his head and said, “A little bit… actually, yes, I do.”
Raymond Wants To Be a Dark Cop
Raymond expressed that he really enjoyed portraying Happy Sir, and was thrilled to know that the audience also enjoyed his character. “Happy Sir is a weird person, and because of that, I get to be more creative with the character.”
He was surprised to discover that filming for Highs and Lows was even more difficult than filming for period dramas. “Highs and Lows is a modern action drama, so everything has to feel more realistic. There is a lot of close combat, and every punch that was thrown was very real. Therefore, it was very easy to get hurt. Luckily, I only had minor injuries and scratches.”
When Raymond first received the script to Highs and Lows, he assumed he would be portraying a dark cop, which was Michael Miu’s (苗僑偉) role in the drama. Raymond was ecstatic to know that he was finally cast in a villainous role, but after thoroughly reading the script and discussing his role with the drama’s producer and crew members, he realized that his character was actually the drama’s most virtuous cop.
Raymond sighed, “I was a bit disappointed, but as I read the story, I realized that my role was actually very fun and entertaining. My role is the kind of character who keeps the audience at the edges of their seats because they can’t figure out what my character will do next. But television has a limit, so I could not go too out of the box when designing my character.”
Source: Apple Daily via ihktv.com