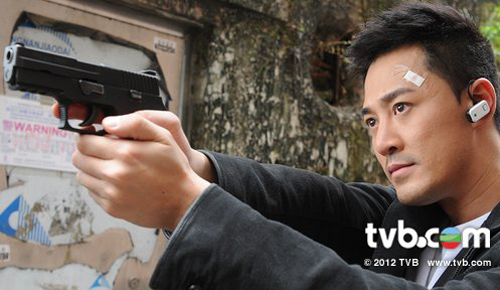 The 45th TVB Anniversary celebration is arriving year-end, and TVB has started launching series after series to promote their own artists to become the next TVB King and Queen. Highs and Lows <雷霆掃毒> will be airing next Monday, September 24 to promote favorite son, Raymond Lam (林峰) to win the TVB King award. This upcoming series features both Raymond Lam and Michael Miu (苗僑偉) as police officers involved in anti-narcotics efforts.

Raymond Lam will debut as a policeman in Highs and Lows. Wishing to be in top shape, Raymond trained hard to build muscles and add definition to his physique  before filming began.

The original sales presentation clip for Highs and Lows featured Michael Miu, Roger Kwok (郭晉安), and Kevin Cheng (鄭嘉穎). However, as soon as Raymond Lam joined the series, the two TV Kings, Roger Kwok and Kevin Cheng, were removed from the show.

Highs and Lows is airing close to the time of the 45th TVB Anniversary Awards. With TVB’s earlier consideration that this year’s winners may be chosen via audience votes, this may possibly give Raymond Lam the edge he needs to win the TV King title.  Raymond believes this type of voting is a simple and fair way to truly show the public opinion. He said, “Winning is not important. This year I am very satisfied with both of my performances in the Three Kingdoms RPG <回到三國> and Highs and Lows, therefore, I feel that I already have something to offer.”

The plot of the series also portrays the love triangle between Raymond, Ella Koon (官思娜) and Kate Tsui (徐子珊). Raymond’s costar, Michael Miu, is paired with Elaine Ng (吳綺莉) and Amy Fan (樊奕敏). It is apparent that TVB is promoting Raymond Lam as the main star. Many TVB fans felt that Michael Miu’s role in the series only helps to showcase Raymond’s talents and good looks.

68 comments to Raymond Lam Promoted to Win TV King With “Highs and Lows”?