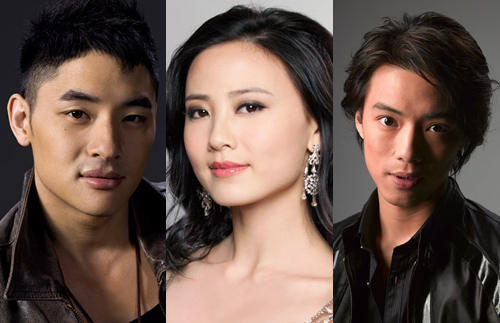 Last year’s Miss Hong Kong winner, Rebecca Zhu (朱晨麗)–also known as Fala Chen’s (陳法拉) lookalike–got a lucky break to star in TVB Anniversary series, Silver Spoon, Sterling Shackles <名媛望族>. Fala decided not to star in the series due to an injury, which gave Rebecca the chance to play Siu Yu in one of the most anticipated dramas of the year.

This is Rebecca’s first TVB series, in which and she will have relationships with Ron Ng (吳卓羲) and (馬國明). In the series, Rebecca will seduce her husband, Kenneth, on their wedding night, and will eventually have an affair with Ron. This role will allow Rebecca to shine, and it is a good opportunity for her to move on her way to stardom.

In the afternoon of October 25, Rebecca was filming Triumph in the Skies 2 <衝上雲霄II> at TVB city. Before filming, she was spotted with her costar, Quinn Ho, eating lunch together at a restaurant. They were laughing and talking continuously for more than an hour. Afterward, Rebecca and Ho went back to work, and still continued to talk until even after the filming was completed.

On the same night, Rebecca and Quinn were filming on location in the Central district, and the scene required them to hold hands. After the scene was over, Quinn was still holding Rebecca’s hand to make sure she stayed warm. When they finished filming their parts, the duo took the company van back to TVB City. Quinn personally drove Rebecca in his flashy Honda sports car back to her apartment, where she is allegedly living with her current boyfriend, Clayton.

As the winner of last year’s Mr. Hong Kong contest, Clayton met Rebecca during a promotional event. In January, Clayton was photographed laying his head intimately on Rebecca’s shoulder while riding on the train, with the pair claiming they were only friends afterward. Recent tabloids reported that they are currently sharing an apartment together in order to be close to the TV studio. Rebecca allegedly dumped her current boyfriend, Kostyantyn Keshyshev, from her former ballet troupe, in order to be with Clayton, who is from a wealthy family.

Rebecca, Clayton, and Quinn are currently filming Triumph in the skies 2. Rebecca portrays a flight attendant, and Clayton is part of a ground crew. With different filming schedules, Rebecca and Clayton hardly see each other during filming.  Quinn, on the other hand, shares a large amount of screen time with Rebecca. Rumor has it that he is taking advantage of the opportunity to get close to her. Quinn is often seen driving Rebecca around town.

Rebecca Spotted at Karaoke With a Rich Man

With already two men under her spell, Rebecca is reportedly still not satisfied. A few nights ago after filming, Quinn was seen dropping off Rebecca, who was wearing heavy make up and dressed in tight clothing, at Tsim Sa Tsui. She was seen meeting another young man from a rich family and another couple for dinner at a restaurant.

Around midnight, Rebecca and the man were spotted strolling on the street of East Tsim Sa Tsui. The rich man is tall and attractive, and it appeared that Rebecca was infatuated with him. When they finally arrived at the Karaoke room, they sat close to each other almost cheek-to-cheek singing until 4 AM.

Since Rebecca reportedly is living with Clayton, she could not stay out all night with the rich man.  Finally after saying their long goodbyes, he sent her back home in a taxi.

With no filming schedule the next day, Rebecca was spotted at 3 PM dressed in all black leaving her apartment. She took a taxi to Admiralty to meet with two male friends. Afterwards, they were picked up by the rich man’s driver to meet him at Ocean Park.

Although Silver Spoon, Sterling Shackles is airing now, Rebecca was not recognized by anyone at the amusement park. She felt free to share ice cream and have heart-to-heart conversations with her male friends. Rebecca and the rich man escaped from the group and had their secret rendezvous. Around 12:30 in the morning, Rebecca and her group of friends left Ocean Park. The rich man was apparently going to take her home. However, Rebecca noticed the paparazzi was following her, so the rich man put her in a taxi and left the scene.