Fala Chen (陳法拉), 40, is currently working hard in building her career in Hollywood. She has landed some important roles, including working with Nicole Kidman in The Undoing and working with Tony Leung (梁朝偉) in Marvel’s Shang-Chi and the Legend of the Ten Rings. Recently, Fala was cast in the HBO remake of classic movie Irma Vep.

In released stills, Fala appears in many different costumes including a tight, black cat burglar outfit, a vintage look complete with a perm, and a maid outfit. She attended the drama’s premiere at the 75th Cannes Film Festival as the only Asian actor in the cast, and caught everyone’s attention in a sparkly, low-cut evening gown. 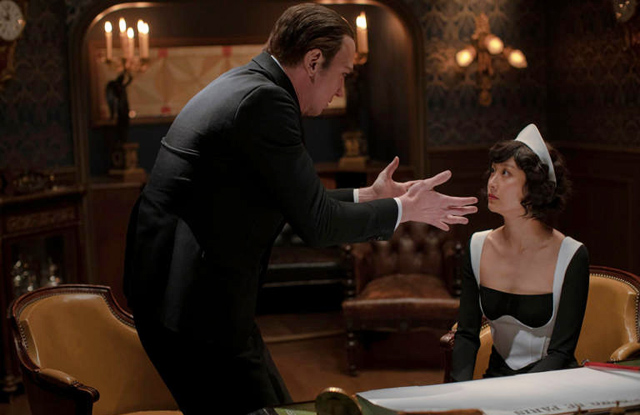 Born in Sichuan, Fala immigrated with her family to the United States when she was 14. She graduated high school as one of the top ten students and was accepted by Emory University on scholarship. During her time in university, she participated in many pageants and achieved great success, including first place in Miss Asian America 2022, first runner-up in Miss Chinatown USA 2003, and first place in Miss New York Chinese 2004. In 2005, she flew to Hong Kong to represent New York in the Miss Chinese International pageant and placed first runner-up behind Leanne Li (李亞男). She signed on with TVB after the contest.

After hosting variety shows, Fala was quickly cast in Forensic Heroes <法證先鋒>, Best Selling Secrets <同事三分親>, and Heart of Greed <溏心風暴>. In 2007, she was nominated for Most Improved Actress and made it to the final five. She continued to film many dramas for TVB and also signed on with a record label as a singer.

At the height of her career with TVB, she was considered one of the Top Five Fadans alongside Linda Chung (鍾嘉欣), Myolie Wu (胡杏兒), Tavia Yeung (楊怡), and Kate Tsui (徐子珊). One by one, they started to leave TVB and Fala took leave to study acting in the United States as well. During this time, she realized her ambitions to improve and made the decision to leave the Hong Kong entertainment industry. In 2015, she was accepted by the prestigious The Julliard School and started a four-year masters program.

Unlike her career, her romantic life has not been as smooth sailing. She secretly married Neway heir Daniel Sit (薛世恒) in 2008, only to divorce in 2013. She found true love not long after, and married her French tech entrepreneur Emmanuel Straschnov after three years of dating in 2019. The couple welcomed the arrival of their daughter in February 2021.