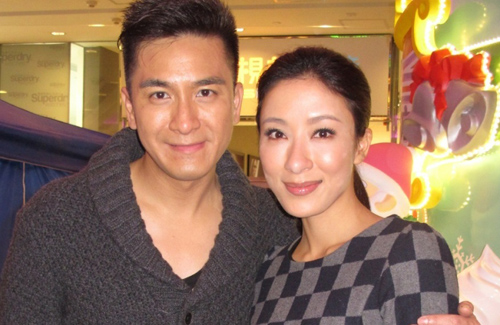 Although The Hippocratic Crush 2 was not as well-received as the first installment, the series generated multiple nominations for its popular cast members, including Best Actor nods for Kenneth Ma and Lawrence Ng, as well as a Best Actress nomination for Tavia Yeung.

Despite winning last year’s TV Queen award, Tavia will vote for herself to improve her chances in tomorrow’s Anniversary Awards ceremony. Tavia’s boyfriend, Him Law ( 羅仲謙), has already cast his vote for her as well. Tavia will also support Him in his run for Best Supporting Actor.

Lawrence Ng believed that he had little chance to win the TV King title and urged viewers to vote for Kenneth Ma instead. Lawrence said, “I feel that my character is more fitting as a supporting role and do not wish to win an award. I heard that Chilam Cheung (張智霖) is a hot favorite, so I will earnestly pull more votes for Kenneth Ma!”

In an earlier interview, Kenneth said that the outcome of the awards is difficult to predict because there is no clear front-runner this year. He admitted that he hopes to win the Best Actor award due to financial motivations. “To be honest, everyone is aware of the salary levels at TVB. Filming ads is the true way to make money.” Kenneth added, “I want to win awards because I hope that afterward, this will offer increased ad opportunities and allow me to earn more money to improve my living standards. I want to buy a bigger house so that my parents can live better.” However, Kenneth faces the Anniversary Awards tomorrow night without pressure, as he will not be disappointed even if he loses.

137 comments to “The Hippocratic Crush 2” Cast Gathers for Finale