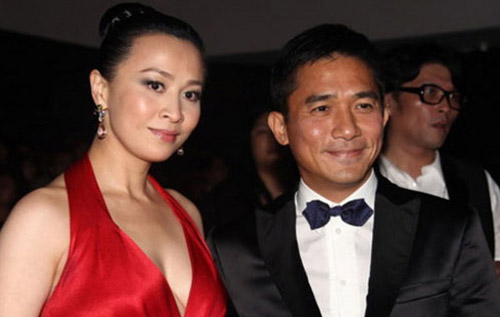 Yesterday, there were rife rumors on the Internet that Tony Leung (梁朝伟) and Carina Lau (刘嘉玲) have allegedly divorced. According to the rumors, the reason for the spilt was due to Carina being too aggressive in character while Tony was too quiet in contrast, thus resulting in irreconcilable frustrations. What exactly opened the door to their divorce plans had also become the focus of many, thus causing a heated discussion amongst netizens. At the moment, both of their management companies have since denied those rumors.

In recent days, the Internet suddenly sprouted rumors of Tony Leung and Carina Lau divorcing. In a definite tone, the rumors claimed that this was due to a large disparity between the couple’s behavior. As it was known to many, Carina’s character was extremely aggressive while Tony was more silent. The gap between the couple’s behavior only grew bigger and the frustrations accumulated over the days and months finally exploded. In consideration of each other’s “face” and the possible impact it may have, it was a secret divorce hence the couple chose not to announce it.

In recent days, Carina Lau has repeatedly been in the news. First, she was rumored to have flown to the United States with Tony to find a surrogate mother.  After that, her earlier deleted nude bed scenes from a film were exposed, making it appear as if her bad news kept coming one after another. However, the news of their divorce still seemed too unbelievable. Currently, a spokesman for their management companies denied the rumors of their divorce and said that the news spreading on the web was not true and thus they see no need to respond to it.

After the news broke out, the alleged divorce of Tony Leung and Carina Lau became the concern of many thus incurring heated discussions amongst netizens. Upon hearing about the news first-hand, quite a few people expressed their disbelief and asked whether the rumor was true, one after another.

Many of their fans were working hard to pursue the original source of the rumors but other than discovering that it was spread through “word-of-mouth” via the Internet,  they couldn’t find the original bearer of those rumors. Some also hoped that Tony and Carina could step up to clarify the truth.

A certain portion of netizens suspected that rumors of the divorce was not entirely baseless. First, the couple truly had a huge disparity between their personalities but being together for so many years, if there was any contradiction, it should have erupted years ago. Why did it only occur after many years of marriage together? Netizens also reasoned that since the management companies did not wish to disclose their reply on this but instead let the entire matter become vague, it strongly reminded them of Nicholas Tse (谢霆锋) and Cecilia Cheung’s (张柏芝) earlier divorce which was exposed by the people around them.  Hence netizens felt that there was a chance of this being true afterall. As to how it will develop in the end and whether there was really such a matter, netizens could only sit on the sidelines and observe the situation.

131 comments to Tony Leung And Carina Lau Divorced Secretly Due To Incompatible Differences?