By natalie on September 21, 2012 in NEWS, Star Interviews 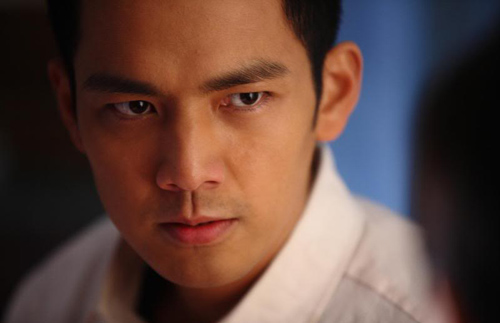 Under new management, Wallace has his sights set on a singing and film career in Hong Kong. He said, “I’ve been filming in mainland Chinese dramas for so long, so I think that switching my focus to Hong Kong will be a fresh change for me. As an actor, we need to expose ourselves to different environments in order to challenge ourselves to become better.”

Wallace has starred in many mainland series and made for a name for himself as an actor in China in the past ten years. At the China TV Golden Eagle Awards, Wallace won the Most Popular Actor award from the Hong Kong, Macau, and Taiwan region. He became the first actor from Hong Kong to win this award.

As much success as Wallace is having in China, the Hong Kong-born and raised Wallace has no intention of purchasing a property in China because that means there  will be less opportunities and reasons for him to return to Hong Kong. He said, “I used to go back to Hong Kong once or twice a year. But now, my mom comes to visit me instead at cities like Beijing, Hangzhou and Chengdu. She uses that as an excuse for a vacation!”

Wallace started his career with TVB in Hong Kong, portraying Kenny Chung (鍾鎮濤) in the drama The Chord to Victory <少年五虎>. Shortly after, he became a singer in Taiwan and found his calling as a promising young actor in China. In the past decade, Wallace has starred in over twenty drama series, with his role in Imminent Crisis <一觸即發> receiving recognition and praise.

When asked if he will pursue a singing career in Hong Kong as well, Wallace said, “The industry in Hong Kong is very difficult because many people in Hong Kong probably haven’t seen my series or listened to my songs before. Now that I’m under a new management company in Hong Kong, I think there will be more opportunities for me to explore singing. I hope that my concert is successful enough that I can tour and also perform in Beijing and Taiwan.”