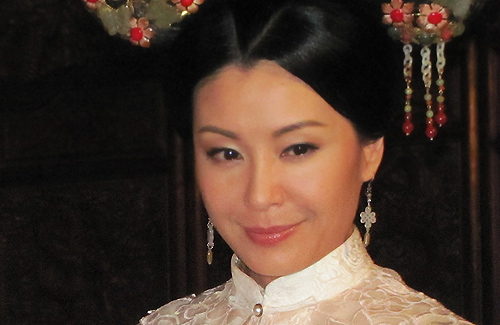 In the upcoming Beauty at War <金枝慾孽 (貳)>, Christine Ng (伍詠薇) will take on the role of a resentful woman whose husband, the emperor, died not long after taking her as his concubine, making her a widow and leaving her loveless. Embittered, Christine takes out her misery on the residents in the palace.

Christine revealed the hardships in filming Beauty at War. “Usually, I only need half a month of preparation time. This time, I spent 2 months to understand the role. Not only did I watch War and Beauty <金枝慾孽>, I also watched other palace dramas to observe how the women carry themselves.” Knowing that there would be last minutes changes to the script, Christine was prepared to memorize the lines on the set, but she never realized that the dialogue would be so long and profound. In the end, she had to burn midnight oil almost every night to memorize her lines.

In spite of the emotional turmoil in filming for the series, Christine was able to detach herself from her role during after-hours, unlike costar Sheren Tang (鄧萃雯), who suffered from anxiety attacks while filming. Christine said, “Maybe the stress of memorizing the scripts really got to everyone, but I didn’t feel she was having anxiety attacks. In any case, I’m a positive person so I won’t let the stress get to me.”

Or perhaps, being able to go home to her husband helped to alleviate the burdens of work. She has been blissfully married to advertising executive Kasey Lin (練海棠) since 1999. If her husband’s love for her were to change one day, Christine would be willing to let him go. “If he were able to find true love, I will let him go and not stop him. I believe that he will do the same for me. Over the years, we have learnt to trust and respect each other. We also learnt not to take each other for granted. For example, we will take the initiative to let the other person know our whereabouts so as not to worry him or her. Honestly, it’s been 14 years and our love is no longer filled with passion. Rather, our love is steady and secure, just like family members.”

Synopsis of Beauty at War

The cunning nanny, Sheung Ling (Ada Choi 蔡少芬), used the opportunity to get close to Consort Yu to investigate the truth and make financial gains for herself.  Sheung Ling becomes Consort Yu’s most trusted confidant, until the arrival of a Kunqu opera troupe. The performers, Lau Fei and Chau Yuen (played by Moses Chan 陳豪 and Eddie Kwan 關禮傑 respectively), move the hearts of many within the harem, including the lonely Consort Yuen.

Worried that her sister will make a grave error in judgement, Consort Yu devises a foolproof plan. Instead, she becomes entangled in the complicated relationship between Sheung Ling and and Lau Fei. Meanwhile, Consort Yuen conspires with Divine Master, Kat Hoi (Kenny Wong 黃德斌) to thwart Consort Yu. And thus begins the internal conflict of the Forbidden City.

Beauty at War is scheduled to air on April 22, 2013. The 30-episode drama will be the last collaboration between producer Jonathan Chik (戚其義) and scriptwriter Chow Yuk Ming (周旭明) for TVB, as the duo will head to mainland China to produce their own television projects.

23 comments to Christine Ng Reveals Plot of “Beauty at War”