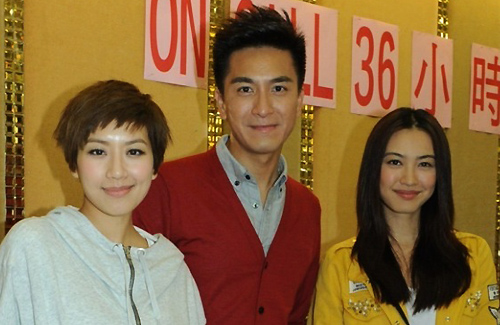 Kenneth Ma (馬國明) is not very hopeful about winning this year’s TV King title, saying it would be lucky to even nab a nomination.

Kenneth attended a staff dinner on November 4 to catch the premiere of his series The Hippocratic Crush 2 <On Call 36小時II>. Reaching 29 points in its debut episode, the highly anticipated medical drama is on the right track to become one of this year’s biggest hits.

While many believe that the anniversary series will give Kenneth the boost his needs to win the TV King crown, the actor instead feels that the show’s status offers no special advantage. With two major productions under his belt this year, Kenneth certainly has a competitive edge. Even so, he humbly concedes the fight before it even began, saying that his Triumph in the Skies 2 <衝上雲霄 II> co-stars Francis Ng (吳鎮宇) and Chilam Cheung (張智霖) are far more deserving.

Regardless of the results, Kenneth has already won over legions of loyal fans during his fourteen years of service. Known as an eligible diamond bachelor, Kenneth has been a target of female friends and fans alike though remained single ever since his break up with Nancy Wu (胡定欣). Although friends are eager to set him up on blind dates, Kenneth still values a traditional courtship: “I have never believed in love at first sight. It is best to date after going through the friendship stage. It is difficult to find a girlfriend while working in this industry… but I would be happy with whatever hand life deals me.”