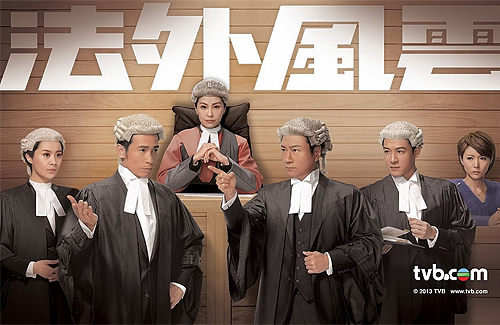 TVB anniversary series, Will Power <法外風雲>, will premiere on Monday, October 14. The 32-episode legal drama features Wayne Lai (黎耀祥) and Moses Chan (陳豪) as rival lawyers bickering competitively in court to defeat one another. Despite the media’s emphasis on Moses and Wayne’s battle for this year’s Best Actor award, the actors expressed their good relationship and happy collaboration.

At a promotional event for the series, Moses and Wayne played a game in which they had to pair up with an actress to rip a piece of paper using their teeth. Wayne partnered with Sire Ma (馬賽), while Moses partnered with Fala Chen (陳法拉). Both actors successfully won the game against their female costars. After the game was completed, Moses quickly distanced himself from Fala. Even when the game was in session, he appeared a little distant, perhaps afraid of arousing rumors since he is now a married man to Aimee Chan (陳茵媺) and is an expectant father.

As a coffee lover, Moses has always been well known for treating his costars with coffee at work. Wayne recalled the times filming Will Power and joked, “Moses offered a never-ending supply of coffee on set. Later on, there might be baby formula too.” Aimee earlier announced she is carrying a baby boy and will likely give birth near the end of the year.

Unlike their strong rivalry in Will Power, Wayne expressed he and Moses do not see each other as competitors when it comes to this year’s TV King title. With the annual TVB Anniversary Awards Ceremony and the birth of Moses’ son both taking place in late December, Wayne sees it as good fortune for his friend. He remarked, “Maybe the award and Moses’ son will arrive on the same day!”