“Brother’s Keeper” Accused of Reusing Plot From 90s Drama, “The Change of Time” 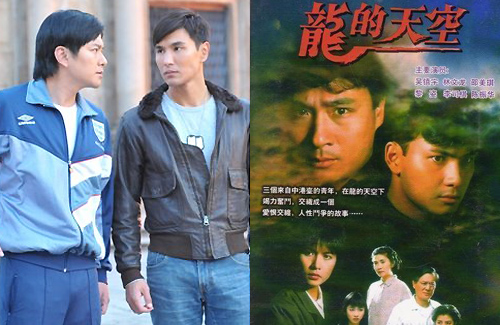 Although it premiered just this week, Brother’s Keeper <巨輪> is already under fire for its many inaccuracies and lazy storytelling. Sharp-eyed netizens have been flocking to discussion boards to criticize some of the more blatant set mistakes. A viewer even went out of his way to suggest possible plagiarism, citing several similarities between Brother’s Keeper and 1992’s The Change of Time <龍的天空>.

Brother’s Keeper is a story about broken families and sibling rivalry that spans 30 years, from the 1980s to the present day. While the initial episodes took place in the 80s, modern background items in certain scenes extinguished the nostalgic illusion. Netizens were quick to call attention to objects that do not belong in the time period, including air-conditioned buses, Hong Kong’s new pedestrian refuges, and modern security cameras.

Recently, a very knowledgeable viewer pointed out that the drama’s plot and characters greatly resemble those of The Change of Time. In a detailed post, the viewer listed the below nine similarities:

1. Both series were directed by Amy Wong (王心慰).

2. In both series, Louise Lee (李司棋) plays a mother who made a failed attempt to illegally enter Hong Kong with her son. In Brother’s Keeper, Louise escaped with sons Ruco Chan (陳展鵬) and Edwin Siu (蕭正楠). While Louise and Edwin ended up in Macau, Ruco successfully made it to Hong Kong. In The Change of Time, Louise attempted to escape with son Francis Ng (吳鎮宇) though neither reached their destination.

3. Louise’s husbands in both series married someone else while in Hong Kong.

4. Louise’s sons in both series searched for and reunited with their birth fathers in Hong Kong.

5. Both series revolve around rivalry and hate between two half-brothers. Edwin was kidnapped by Ruco for money, while the innocent Frankie Lam (林文龍) was sent to jail as a result of Francis trying to cover up for an accidental murder.

6. Both plots involve regions outside of Hong Kong. In Brother’s Keeper, parts of Edwin’s story takes place in Macau. In The Change of Time, the plot includes characters from Mainland China and Taiwan.

7. In both stories, the main villain is one of the brothers.

8. Both are modern dramas that deal with conflicts that span two generations.

9. Both main villains escaped from China to Hong Kong, and were initially good people who later commit sinful acts to achieve certain goals.

Others also pointed out that in both series, the two brothers pursued the same love interest. Ruco and Edwin chased after Linda Chung (鍾嘉欣), while Francis and Frankie both had eyes on Gigi Lai (黎姿).

137 comments to “Brother’s Keeper” Accused of Reusing Plot From 90s Drama, “The Change of Time”