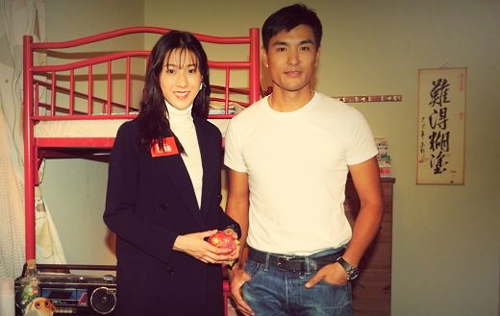 TVB’s highly anticipated modern drama Brother’s Keeper <巨輪> will finally debut next Monday, September 23. Produced by Amy Wong (王心慰), the 32-episode series will explore the rapid social, economic, and political changes that have influenced Hong Kong and Macau since the 1980s, and will touch upon the themes of ethics and resilience in the face of adversity. The story follows a pair of brothers over a span of 30 years, and the lead cast members will each play their role from their 20s to their 50s. To achieve realism, TVB had put in great efforts to ensure the cast are dressed in outfits appropriate for each time period. The production team also inserted actual news footage and headlines into each episode to invoke nostalgia.

The series begins with a kidnapping case in 2013 and later shifts to the start of the story in 1980. Kiu Tin Sang (Ruco Chan 陳展鵬) and Law Wai Shun (Edwin Siu 蕭正楠) are half-brothers from Foshan, China who became separated while escaping from mainland. Tin Sang made it safely to Hong Kong on his own, and despite hardships, he eventually adjusted to the new environment and became a member of the Hong Kong Police. Later he meets fashion designer Rachel Cheuk (Linda Chung 鍾嘉欣) and the two fell deeply in love even though Rachel’s mother (Susan Tse 謝雪心) disapproves of their relationship.

Meanwhile, Wai Shun and his mother Chow Yuk Mui (Louise Lee 李司棋) end up in Portuguese Macau. The two settled there as illegal immigrants and make a modest living by selling peanut and ginger candies on the streets. Growing up, Wai Shun develops a strong friendship with tomboy Yiu Man Ying (Kristal Tin 田蕊妮) and wealthy heir Lung Fei (Louis Yuen 阮兆祥). Wai Shun dreams of owning a thriving pastry business. Through hard work, perseverance, and the help of his childhood friends, he eventually accomplished his goals and became the owner of an acclaimed pastry chain.

Both brothers’ ambitions continue to grow as Hong Kong and Macau developed into thriving cities. While Wai Shun is slowly building his business empire with care and good work ethics, Tin Sang sought out shortcuts instead. To quickly boost his career, Tin Sang sweet-talks his way into the elite social circles, where he meets beautiful, wealthy heir Favio (Ankie Beilke 貝安琪). Later, when he becomes knee-deep in debt after the stock market crashed, Tin Sang tries to save himself by taking advantage of Favio, seducing her shamelessly for a slice of her massive family fortune. His various self-serving behaviors deeply hurt and anger girlfriend Rachel and completely destroys the remaining foundations of their shaky relationship.

Tin Sang falls even deeper into darkness at the end. He later becomes involved with triad gangster Keung Yung (Louis Cheung 張繼聰), and with Yung’s help, plans to kidnap his now wealthy half-brother Wai Shun. The two brothers meet once again at this climatic moment and the story finally comes full circle.