Nick Cheung on Working With Transgender Thai Actress, Poy, in “The White Storm” 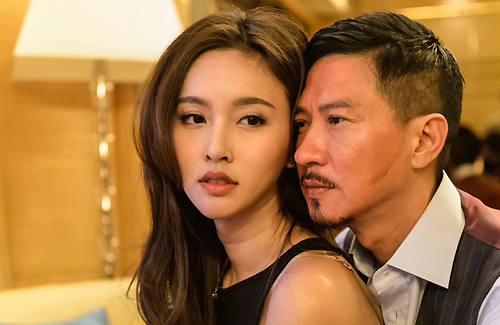 Known for starring in high-budgeted action films, Nick Cheung (張家輝) once spoke about his desire to film a relaxing romantic comedy. Though that wish may not be fulfilled anytime soon, director Benny Chan (陳木勝) and scriptwriter Alan Yuen (袁錦麟) did tease Nick with a special side story arc in their upcoming crime thriller, The White Storm <掃毒> – a romance with famous Thai actress, Poy.

Poy, also known as Treechada Petcharat, was born a male in 1986. At 17 years old, Poy underwent sex reassignment surgery. Two years later, she competed in the Miss Tiffany’s Universe pageant, an annual beauty contest held in Thailand for transgendered people. Not only did Poy win the title as Miss Tiffany, she also won the Miss International Queen, the world’s most prestigious transgender beauty pageant.

Starring as the Thai drug dealer Mina in The White Storm, the film is also Poy’s Chinese film debut. Benny Chan explained that Poy had beaten out many actresses vying for the part and praised Poy’s natural acting talent. “She’s also very brave,” said the director.

Mina will have a relationship with Nick Cheung’s character, Cheung Chi Wai, in the film. The director said, “Nick Cheung knew he would be working with a transgendered beauty, but he was in complete shock when he first met Poy. His jaw literally dropped and he couldn’t close it. It was a hilarious scene.”

Nick’s costar, Sean Lau (劉青雲) laughed at Nick, “Nick Cheung doesn’t get much romance in his films. Look at how happy he is at working with Asia’s sexiest, Poy. He has heavy taste!”

Nick said, “The four of us are very close. Poy would always introduce us to some delicious Thai food and where to have fun in Thailand. She was like our little sister. We were sad to leave each other after the film completed.”

64 comments to Nick Cheung on Working With Transgender Thai Actress, Poy, in “The White Storm”