Charmaine Sheh on Working With Louis Koo: “He’s Too Handsome!” 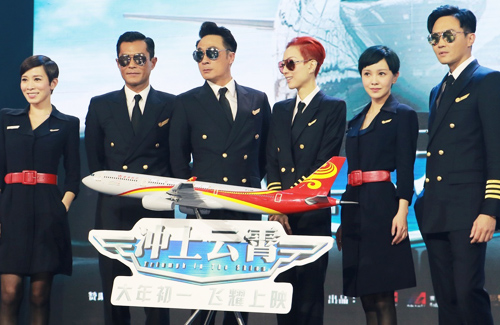 Playing the role of an airline company CEO as well as a pilot, Louis will have a romantic storyline with Charmaine. Standing beside Louis onstage, Charmaine could not hold in her enthusiasm, “There was a lot of pressure filming with him. He is too handsome! I had a hard time immersing myself into character. Fortunately, the locations for our dates in the film were very romantic, which helped tremendously.”

Smiling, Louis expressed his admiration for Charmaine and praised her performance, “She is very professional. On a personal level, she is also very genuine and easygoing, so it is very relaxing to act alongside her.”

In the film, Chilam Cheung reprises his role as the charming and alluring Captain Cool. He will share a romantic storyline with Amber Kuo in the film. Amber expressed, “Chilam is very handsome, so the name of Captain Cool is fitting. I’m often mesmerized by his gaze and I can’t stand the feeling! But after interacting with him, he feels more like an older brother who knows how to take care of the people around him. So I’m happy to have the opportunity to ‘date’ a handsome, yet gentle pilot!”

34 comments to Charmaine Sheh on Working With Louis Koo: “He’s Too Handsome!”