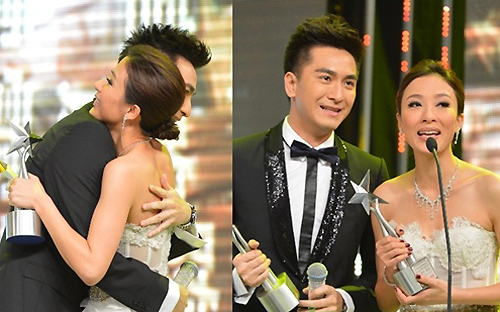 Malaysia successfully held their Astro on Demand Awards at the Sunway Convention Center on the evening of December 2, 2012.

This year, a total of 12 categories were presented. Each category, with the exception of My Favorite Promising Artist, My Favorite Character, My Favorite Theme Song, and My Favorite Most Improved Actor and Actress, had a total of 10 nominees, which were later reduced to five top nominees at the beginning of the ceremony.

“I really did not want to accept this role,” cried Him, referring to his role as Dr. Yeung Pui Chung in The Hippocratic Crush, “Not only did this drama give me a great role, it also gave me something very important in my life.” Under the screams of the audience, Him finally cried, “Thank you, Tavia Yeung!” The crowd erupted into cheers.

Aside from winning My Favorite Leading Actor and My Favorite Leading Actress, Kenneth and Tavia also won the My Favourite On Screen Couple with Kenneth Ma for their roles in The Hippocratic Crush. The onscreen couple’s chemistry and real-life friendship have gained them many new fans worldwide, becoming one of TVB’s most popular couple year-to-date.

When Tavia was on stage for her individual acceptance speech, Kenneth surprised Tavia by suddenly appearing at the bottom of the stage in front of her. Kenneth loudly professed, “If there is ‘Yu Jai’ there will always be a ‘Yat Kin Tau.’ We are one!”

In a breathless speech, Mandy Wong, who won My Favorite Promising Actress for her role in L’Escargot <缺宅男女>, cried, “This is the first award I’ve won in my performance career. This award gives me such a great inspirational boost!”

Koo Ming Wah broke into tears after his name was announced for the Popularity King award. He cried, “For many, winning an award can be very difficult. But for someone like me, having the chance to even attend such events is difficult. I promise to bring out even better productions in the future for everyone!”

Oscar Leung nearly cried when he ran to the stage to accept his My Favorite Promising Actor award, “This is my first award since joining the industry over ten years ago. I once imagined myself winning an award, but I was afraid that this dream would not come true. Now, it has finally come!”

Check out the rest of the winners down below!